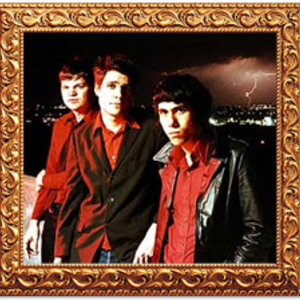 A Short History of The Prima Donnas A long time ago in a country far, far away (England, 1980) the three lads collectively known as The Prima Donnas met one another. Otto, Nikki and Julius were all transferred to the same orphanage, St. Orleans of the Cross, under the warm care of Father Heathcliff. They did as orphans do, which is basically to run wild without supervision, except on Sundays, when they had church service and the prospective adopters would come to look at the children.

A long time ago in a country far, far away (England, 1980) the three lads collectively known as The Prima Donnas met one another. Otto, Nikki and Julius were all transferred to the same orphanage, St. Orleans of the Cross, under the warm care of Father Heathcliff. They did as orphans do, which is basically to run wild without supervision, except on Sundays, when they had church service and the prospective adopters would come to look at the children. Otto and Julius were chosen by numerous families over the years but never left the orphanage because they knew that Nikki would never be adopted and that no one would look after him should they leave. The story is still the same today. The boys have had to turn down countless major label opportunities because kicking out Nikki is usually a stipulation to signing.

Over the years, The Prima Donnas' musical gifts were carefully honed playing the church circuit of Southern England. After going secular in the well-publicized and dramatic break with their manager, Father Heathcliff, The Prima Donnas landed a plum weekly gig on the morning variety show Talking Tots, broadcast on national television in England. Soon, they were too old for the program and at seven years old found themselves in the unenviable position of being ex-child stars. It was a time that is considered, arguably, the blackest chapter in the history of the band.

Otto and his older lover, 28-year-old model Stassney Elf-Ritzhauer, whom many considered to be his surrogate mother and the brains behind his public refutation of Khrishna, broke up amid rumours of alcoholism and chronic infidelity. Julius fared no better, authoring the controversial lifestyle opus, I Prefer Leather: Secrets of the Sexual Gourmet. The content proved popular, but the cover illustration of Julius kicking in the head of a younger boy at the orphanage (already dead) proved too much and the book was banned, with Julius spending seven months in Brixton Youth Penitentiary, to boot. Nikki fared the best, but only comparatively. He opened a small business catering to the interests of lonely bachelors, which was quite successful, until pressure from the police following Julius' arrest forced him to close shop.

Fortunately, their careers were rejuvenated when Candy Boyz frontman Wild Bernard covered the forgotten Prima Donnas "C" side "But I'm Horny." The song was an instant hit and jammed itself in at #1 on the British charts for all of summer 1987. Older and wiser, The Prima Donnas re-entered the music scene with the smash LP "We're Back! Don't Shit Yourselves," which also logged in at #1 that year. Another #1 album followed closely on its heels and then came Julius Seizure's reckless public fall from grace when he was photographed nude in the phone booth at Trafalgar Square in London snorting cocaine off of Princess Diana's niece, Penelope. The black smear this painted on swinging London in 1989 was immeasurably devastating and the authorities soon trumped up a small mountain of charges against Mr. Seizure, who then became the first British citizen to be exiled since, coincidentally, Julius Jones in 1607.

Ever loyal, the rest of The Prima Donnas followed Julius to Australia, where they spent a year and a half before they even realized that the country they had actually been thinking of was America. After ending their relatively uneventful stay in the land down under, they traveled to Texas and stayed there for a long time, charming the locals and building a solid reputation as The Best Band in Quite Some Time. The accolades kept piling up and soon the boys once again found themselves nearly universally adored, even so far as to be invited to perform at the opening of the Barbara Bush Venerable Ladies of the White House Library.

As is the case in every rock and roller retrospective however, there comes the inevitable decline (number three in this particular narrative). Due to poor financial management, Julius Seizure found himself penniless and in debt at age nineteen, while the other Prima Donnas were living high on the hog in their respective ranches in the West Texas desert. It created a lifestyle rift that was only to grow wider despite their still brilliant musical collaboration. The concept album, "Music From Inside the Biggest Mansion in the World," had to be scrapped due to the smallness and lack of monetary vision of Julius' keyboard parts. Plans to move to Switzerland to be near their bank accounts also were set aside when it was revealed that Julius had no accounts there.

Finally, in summer 1998, the boys parted ways geographically. Julius went in search of employment in New York City, where he found work as an assistant waiter. Nikki retreated into cyberspace, designing software that will let the user create virtual bandanas to be worn by video game characters. Otto ventured to Los Angeles and released a solo record under the pseudonym "Sisquo." The band now gets together only during the summer months, when they tour and record more hit singles.