The Plastic People Of The Universe 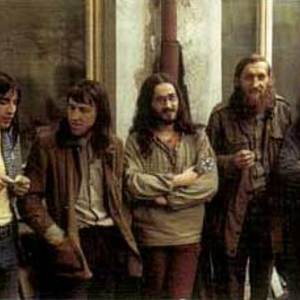 The Plastic People of the Universe are a czech underground rock band, experimental and strongly influenced by The Velvet Underground and Frank Zappa. The band was formed in 1968 in Prague by Milan Hlavsa less than a month after the invasion of Czechoslovakia by Soviet forces. Along with artistic advisor Ivan Martin Jirous, Josef Janicek and Jiri Kabes they began staging concerts while the USSR was trying to "normalize" the Czech rock scene.

Their non-conformity lead to their license to perform being revoked by communist authorities in 1970. Adding Canadian Paul Wilson as singer, they continued as a band, performing music by the Mothers of Invention and the Velvet Undergorund. In 1972 they were banned from playing in Prague and moved to the countryside, losing Wilson and adding Vratislav Brabenec on saxophone, who insisted that they only perform original music in Czech. During this time, the band went underground, locations of concerts spread by word of mouth a tight-knit group of fans who would gather to remote places to see the Plastic People perform. The band was arrested and put on trial for "organized disturbance of the peace" in 1976. Protests of these arrests led to the formation of the dissident group Charter 77 that eventually formed the backbone of the Velvet Revolution in 1989. Ironically, however, the band itself splintered in 1988, with founding member bassist Milan Hlavsa starting a splinter group, P?lnoc, that toured the West. They got back together in 1997 playing on 10th February 1997 at the 20th anniversary of Charter 77. Former Czech president V?clav Havel is a big fan of this group and helped them in the times they had problems with communist regime.
Milan Hlavsa, lead vocalist, bass player and founder of the band, died in 2001. Nevertheless, the band is still playing on with Eva Turnov? on bass.

More info at the official site.

Also, The Plastic People - wrongfully redirecting to this page - were a californian sunshine pop/psych band with two 7"s - one of which was produced by Curt Boettcher.

The Garden Is Open