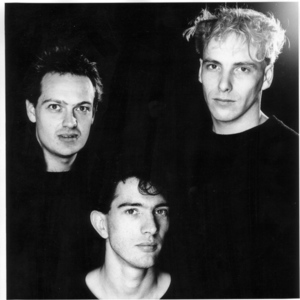 THE OPPOSITION are English, from the southern suburbs of London. Mark Long, Marcus Bell and Ralph Hall seek through the colorless colors (black and white) the purity of the rates/rhythms which obsess you like the tick-tock of an alarm clock at the time of long sleepless nights! They came out with their first album of world exclusiveness at DISC' AZ on September 23, 1981. The originality of OPPOSITION lies in the marvelous mixture between the search for beautiful atmosphere and strong musical energy.

Founded in 1979, OPPOSITION was initially pointed out by its first single "Very Little Glory" on the small DOUBLE VISION RECORDS label, which they had started for the circumstance. New Musical Express qualified the record as "a song recorded before its time". During the summer of 1980, a second single " This Year " came out by Ariola. OPPOSITION then decided to record the "Breaking The Silence" album which they produced themselves. Strongly allured by this original step and undertaking, DISC' AZ signed them in July 1981. A great French tour accompanied the release of the album as well as a Parisian concert.

On the level of inspiration, the music of the group reflects the environment of 80's England perfectly. The atmosphere which conveyed " Breaking The Silence " was dominated by the obsession of the 2nd World War. The Opposition affirmed their patronymic choice by refusing the contracts which the majors agitated under their nose. In the name of self-management, they assembled their own label Double Vision and with the complicity of sound engineer Kenny Jones, the group financed the recording of an album of a total dark, rare and tough intensity. One year later OPPOSITION recorded " Intimacy " in the Matrix studios of London. In France, the group got more and more fans allured by their new cocktail of reggae/new wave to crossroads of Font, Cure and U2. Charisma, the famous label finally co-opts " Intimacy " which comes out in England.

Two years later, in 1984 " Promises " appears on Charisma. First world output and first adventure in the United States. " Empire Days ", the fourth LP released in 1985 with its climatic vibrating " Five Minutes " & " First Suspect " is undoubtedly their most successful album. Three years later, Mark Long and Marcus Bell re-appear on Manhattan/EMI under the pseudoname SO. Their single " Are You Sure " reaches nr. 30 of the US charts and their clip is plebiscite voted as clip of the week by MTV. The singer/guitarist and the bass/keyboard player reform OPPOSITION in 1990 for the intimate " Blue Alice Blue " album recorded in the same spirit as the first LP with faithful producer/engineer Kenny Jones. The year 1994 announces the return of the OPPOSITION with the CD " War Begins At Home " produced by Marcus and mixed by Kenny Jones. Marking the sixth episode of the OPPOSITION's musical adventures.... in 2003 the blinder album was released on mrs jones records ...there was also a live bootleg album released on rightbackrecords in 2004 called new york paris peckham ... ...In 2005 the very first opposition album recorded in 1979 but never released finally found an outlet on rightbackrecords ..called 'the lost album '...thats about it ...maybe!

If She'd Only Heard of Ray Charles