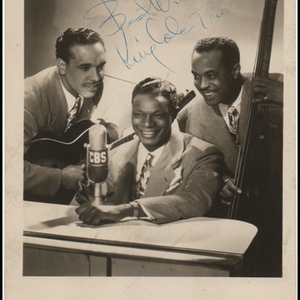 Before his international acclaim as a pop vocalist, Nathaniel Adams Coles built an indelible reputation as a jazz pianist in the groundbreaking combo, The King Cole Trio. Born into a musical family, young Nat Coles (later changed to Cole) recorded with his older brother, Edward, in 1936 for the Decca label. The four sides cut by Eddie Cole's Solid Swingers gave the general public its first glimpse of Nat's gentle yet lively piano riffs. After touring with a revival show of Eubie Blake's revue Shuffle Along, Cole settled in Los Angeles, playing various nightclubs as a soloist.

In 1937, club owner Bob Lewis suggested that Cole assemble a small band to work at his Swanee Inn on North La Brea. The group's unorthodox instrumentation and size - they had no drummer and, at the time, big bands were the rage - featured Wesley Prince on bass and the innovative phrasings of electric guitarist Oscar Moore. The Trio's blend of jump blues and jazzy instrumentals with bouncy vocal stylings was a collective effort, while Cole occasionally took the lead on standard ballads. After an uneventful 1939 session for the Davis & Schwegler recording company in Hollywood, The Trio accompanied Lionel Hampton on two recording dates the following summer. Their association with Hampton helped, and that winter The Trio signed with Decca. Their 1940-41 sessions for the label yielded sixteen songs and captured the attention of fellow musicians, fans and a handful of critics. Later that fall, The Trio sounded right at home with drummer Lee Young on a four-song session for the Ammor label. In 1942, Cole recorded with Red Callender and saxophonist Lester Young for the Philo/Aladdin label, Oscar Moore with Cole at the piano. Image courtesy of the Dave Dexter, Jr. Collection.producing a handful of recordings that became benchmarks in their individual careers. Signing with Capitol Records in 1943, The Trio consisted of Cole, Moore, and Johnny Miller, who had settled in as the permanent bassist. Moore left the fold in 1947 and Irving Ashby replaced him. Capitol Records featured The Trio less and less after that, while Cole was singled out as a vocalist often backed by lush string orchestras. By the 1950's, Cole's reputation as a singer had reached a wide pop audience and, upon his death in 1965, his place in music history was forever cemented. His fellow jazz peers, however, never forgot his equally unique touch on the piano and the influence his early trio work had on later performers such as Oscar Peterson, Red Garland, and Tommy Flanagan.