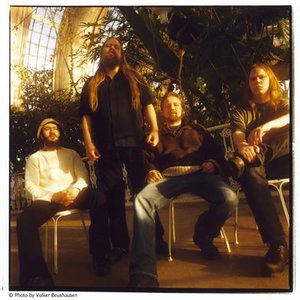 The Mushroom River Band is a stoner metal band founded by guitarist Anders Linusson, bass player Alexander "Saso" Sekulovski and drummer Andreas Grafenauer in 1996. This line-up recorded one demo tape with Christian "Spice" Sj?strand from Spiritual Beggars as a guest singer. In 1997 Chris Rockstr?m took over on drums and Spice joined full-time as a singer along with his duties in Spiritual Beggars. A vinyl EP called 'Rocketcrash' was released in 1999 on the band's own Tea Pot Records label.

In 2000 the first full length album, 'Music For the World Beyond', was released and the year after Spice left Spiritual Beggars to concentrate solely on The Mushroom River Band. After the sophomore release 'Simsalabim' in 2002 and the European tour that followed the band was put on hiatus, and Spice left the band the following year. The band decided to break up in 2004.

Music For The World Beyond