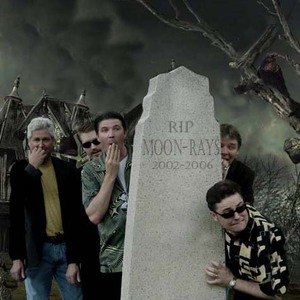 The Moon-Rays are unique, As MonsterKid Magazine said, "There is nothing quite like them out there today". They have taken Instrumental Surf and blended it with Beatnik jazz, 1950's Exotica, 60's Spy sounds and dressed it all up in a retro Halloween package. In 2001 the Moon-Rays recorded the theme from WGN's "CREATURE FEATURES" television show, which got them immediate attention across the country with people who grew up in the 60's and 70's in Chicago and remembered fondly sitting in front of the TV on Saturday nights watching the show

This recording gave them the opportunity to record their first CD for Sound Imp Records. "THRILLS AND CHILLS" came out in 2002 and was composed mainly of cover songs of groups like the John Barry 7, Henry Mancini, some music from the television show the "MAN FROM UNCLE", as well as two original songs.
One of these songs "1313 MOCKINGBIRD LANE" (named after the address of the Munsters home) found it's way onto numerous Halloween broadcasts that year and was picked up for two movies, "DR HORRORS EROTIC HOUSE OF IDIOTS" and the upcomming documentary on the Horror Host history "AMERICAN SCARY".
93 WXRT radio in Chicago picked "THRILLS AND CHILLS" as best instrumental release for 2002, quite an accomplishment for a "spook" band.

Swingin' At The Seance

Swingin At The Seance'