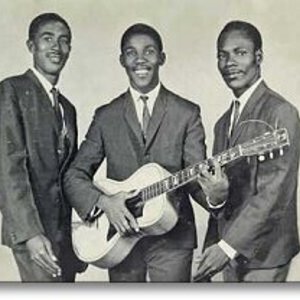 Toots and The Maytals, originally called simply The Maytals, are one of the best known ska and reggae vocal groups. Their sound is a unique, original combination of gospel, ska, soul, reggae and rock. For those who've always wondered what "Maytal" means: it is Hebrew for "dew water". Thus, the name of the group can be loosely translated as Toots & the Dew Drops. Frederick "Toots" Hibbert, the leader of the group, was born in May Pen, Clarendon, Jamaica. He was the youngest of seven children.

For those who've always wondered what "Maytal" means: it is Hebrew for "dew water". Thus, the name of the group can be loosely translated as Toots & the Dew Drops.

Frederick "Toots" Hibbert, the leader of the group, was born in May Pen, Clarendon, Jamaica. He was the youngest of seven children. He grew up singing gospel music in a church choir, but moved to Kingston in 1958 at the age of thirteen. In Kingston, Hibbert met Henry "Raleigh" Gordon and Nathaniel "Jerry" McCarthy, forming in 1962 a group whose early recordings were incorrectly attributed to "The Flames" and "The Vikings" by Island records in the UK.

The Maytals first had chart success recording for producer Clement "Coxsone" Dodd at Studio One. With musical backing from Dodd's house band, the legendary Skatalites, the Maytals' close-harmony gospel singing ensured success, overshadowing Dodd's other up-and-coming vocal group, The Wailers. After staying at Studio One for about two years, the group moved on to do sessions for Prince Buster before recording with Byron Lee in 1965. With Lee, the Maytals won their first Festival Popular Song Competition with "Bam Bam". However, the group's musical career was interrupted in late 1966 when Hibbert was arrested and imprisoned. Toots states that he was not arrested for ganja but while bailing a friend. He also states that he made up the number 54-46 when writing 54-46 That's My Number about his time in jail.

Following Hibbert's release from jail towards the end of 1967, the Maytals began working with Chinese-Jamaican producer Leslie Kong, a collaboration a string of hits throughout the late sixties and early seventies - "Do the Reggay", a 1968 single widely credited with coining the word reggae, "Pressure Drop", "54-46" the 1969 Jamaica festival's popular song winner, "Sweet & Dandy" and "Monkey Man", the group's first international hit in 1970 . In 1972 they won their third Jamaica festival popular song with "Pomps & Pride". The group was also featured in one of reggae's greatest breakthrough events - The Harder They Come, the 1972 film and soundtrack starring Jimmy Cliff, named as one of Vanity Fair's Top 10 Best Soundtracks of all time.

Following Kong's death in 1971, the group continued to record with Kong's former sound engineer, Warwick Lyn; the group released three best-selling albums produced by Lyn and Chris Blackwell of Island Records, and enjoyed international hits with Funky Kingston in 1973 and Reggae Got Soul in 1975. Following the release of "Reggae Got Soul", Toots & The Maytals were invited to tour as the warm-up act for The Who during their North American Tour. The tour went poorly and Toots & The Maytals never went on the success of Bob Marley or Peter Tosh in the US.

Toots and the Maytals' compositions would be given a second airing in 1978-80 during the reggae-punk and ska revival period in the UK, when The Specials included "Monkey Man" on their 1979 debut album and The Clash produced their version of "Pressure Drop". They were also included in the Bob Marley and the Wailers song, *Punky Reggae Party". "The Wailers will be there, The Damned, The Jam, The Clash, The Maytals will be there, Dr. Feelgood too".

Having toured throughout the world for many years, Toots and the Maytals disbanded in the early 1980s, but reformed in the early 90s to continue touring and recording successfully. Sublime recorded cover versions of some Maytals songs in the 1990s as well.

The group recently won the 2005 Grammy award for best reggae album True Love, an album consisting of re-recorded versions of their classics alongside popular and legendary musicians such as Bonnie Raitt, Willie Nelson, Eric Clapton, and Keith Richards, as well as popular artists today such as No Doubt, Ben Harper, The Roots, and Shaggy.

In 2006, they recorded a reggae/ska version of Radiohead's Let Down for the tribute album, Radiodread, by the Easy Star All-Stars. The album is a complete song for song makeover of the English rock band's album OK Computer into reggae, dub and ska. Let Down has been frequently cited by reviewers as one of the successes of the album.

A follow up to 2004's Love was being recorded in 2005 and released in 2007, and featured re-workings of classics such as "Johnny Cool Man" as well as new material. Light Your Light was nominated for the Grammy in the category Best Reggae Album.