The Master Musicians Of Joujouka 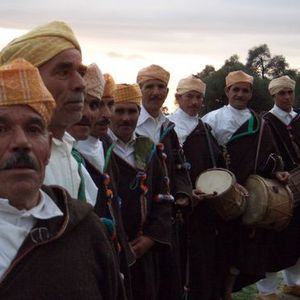 The Master Musicians of Joujouka (until the 1990s synonymous with The Master Musicians Of Jajouka, but now a separate recording group) are an ensemble of sufi trance musicians from the village of Jajouka, Morocco in the southern Rif Mountains. The music of Jajouka is a form of reed, pipe, and percussion music that relies on drones, improvisation, and complex rhythms, much of which is unique to Jajouka, often creating a trance state, induced by the intense sound and rhythm of the flutes.

Their first exposure to Western audiences, while under the leadership of Hadj Abdesalam Attar, came through their introduction to the Beat generation. Painter/folklorist Mohamed Hamri, whose mother was an Attar from the village, led artist Brion Gysin to Jajouka to meet the group. Gysin became fascinated with the group's music and led writer William S. Burroughs to the village. Burroughs described it as the world's oldest music and was the first person to call the musicians a "4000-year-old rock and roll band". In Tangier, Gysin and Hamri founded the 1001 Nights restaurant, in which the musicians played throughout the 1950s to a largely Western audience.

The official site for The Master Musicians of Joujouka is http://www.joujouka.net/.