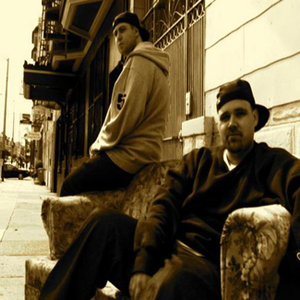 In a time when hip hop is in desperate need of originality, a refreshing sound can be heard from three hard working Bboys. The Loyalists have emerged onto the scene from Burlington VT and now claim San Francisco as their base of operations. They prove the old saying to once again be true It aint where youre from, its where youre at. The Loyalists are strong hip hop artists who dont let todays trends shape where they take their music.

The Loyalists are strong hip hop artists who dont let todays trends shape where they take their music. You only need a quick listen before it becomes obvious that they are here to stay. Clever lyrics are weaved over hard, melodic beats to keep your head nodding while demanding a conscious mind from listeners. Their turntablism background becomes evident with lightning sharp cuts that separate them from some common groups of today. The Loyalists influences come from their love of the early 90s sound that could be found in such groups as Black Moon, De La Soul, Gang Starr and Organized Konfusion. However, they produce an original sound that cant be found anywhere else.

Framework and E-Train made hip hop music together from an early age, but it was in 2001 that the two came together as a group. They started off as a turntablist crew, but it wasnt long before realizing that they possess all of the needed tools to form a dynamic hip hop group. Framework has been rhyming since he can remember and his unmistakable flow is proof of his natural talent. E-Train holds down the production with attention grabbing beats that earn respect from the most critical hip hop crowds.

The impact of The Loyalists can be felt from their mesmerizing live shows. They have shared a stage with artists like Jedi Mind Tricks, Wordsworth, Mr. Lif, Akrobatik, Pharcyde, KRS-One, and others. When they come to your town, you wont want to miss them. Check for their debut album Moodswing, as well as their new album, Get What You Give. The Loyalists are stampeding their way to the top, and whether the world is ready or not, they will be heard.

Get What You Give