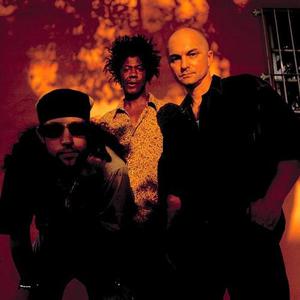 Taking notes from such successful interpreters of the blend of South American and Western sound as Jazzanova, Incognito and Masters At Work, The Latin Project owe as much to those entities as they do to the classic works of Milton Nacimiento and Sergio Mendez. On their debut artist album for Electric Monkey Records, Nueva Musica, The Latin Project--English natives Jez Colin and Matt Cooper--exercise their knowledge of underground, cutting edge dance music, while enhancing it with organic components such as warm vocals and traditional musicians.

Inspired by a genre that is dominated by beat and club aesthetics, but lacking in musical sophistication, Matt and Jez pooled their wealth of musical expertise to start The Latin Project. "We wanted to blend some of our favorite established Latin musicians with the most up-to-date electronic production," says Jez. "We've always been fans of Latin music," adds Matt. "Not just restricted to the dance floor, but crossing over to something you can listen to at home as well as dance to: a contemporary record with songs and performances. We tried to do something with all those elements."

Meeting in 1996, Jez and Matt started working on The Latin Project in 1998. Both co-produced and wrote material for the project, with Matt adding keyboards and drums. A multi-talented musician, producer, writer, remixer and programmer, Jez co-founded in 1993 the groundbreaking acid jazz group The Solsonics for whom he played bass. In 1995, the Solsonics hit the road as a supporting act on the Queen Latifah tour with the Fugees, thus giving Jez the opportunity to hone his live performance skills and showcase his talents to a broader audience. After they disbanded in 1997, Jez relocated to Los Angeles and turned his attentions studio-ward. Among his credits are remixes for Maxwell, Sade, Stevie Wonder and Bjork, as well as programming on the current project for William Orbit (of Madonna's Ray Of Light fame).

Living in London, Matt has been working under the guise of Outside, producing five albums on UK label Dorado Records. His standout single "To Forgive But Not Forget"--affectionately known as "the jungle track with the mad violin," a mini-anthem of sorts--has been featured on numerous compilations. Additionally, he has worked on all D*Note albums, co-produced and written for forward-thinking jazz greats Incognito on their new album, which also boasts India Arie, Paul Weller and Terry Callier. Matt recently completed a Southeast Asian tour with Incognito and a worldwide trek with David Sylvian.

The collaboration that grew into Nueva Musica began initially with Brazilian multi-instrumentalist/vocalist Junno Homrich (whose credits include the Emerald Forest soundtrack) and another Brazilian singer, Katia Moraes, of the band Sambaguru. The first Latin Project single "En Fuego"--a UK garage inspired flamenco styled number, part Basement Jaxx, part Gypsy Kings, with a remix from Nickodemus and Osiris--was released on Giant Step Records summer of 2001 to enthusiastic response. Encouraged by the interest "En Fuego" had created, Jez and Matt began pursuing the idea of a full-length Latin Project album. Over three years of international travel between Los Angeles, London and Rio resulted in a deeply personal expression of The Latin Project's attempt to explore the limits of Latin-based music.

From his previous endeavors, Jez feels he has brought "a true sense of how to incorporate programmed and computer-based music with live musicianship" to The Latin Project. From fiery percussion, keyboard solos, flavorful guitars, joyful trumpets to sub-bass and hard-as-nails beats, these ingredients create the structure for a myriad of styles that incorporate everything from nu-jazz to broken beat, downtempo, dub and ambient moods, all sifted through a Latin-inspired filter. "Nueva Musica surpassed what we had originally set out to do," says Jez. "Initially we had one or two collaborators. We ended up working with a more eclectic and wider base of talent that we ever thought possible. It evolved into something that was more worldly than we had planned, much to the benefit of the project."

Jez and Matt selected collaborators for Nueva Musica carefully and thoughtfully; among these are Freddie Crespo, erstwhile percussionist and vocalist for Tito Puente, on "Lei Lo Lai," which also features Robbie Nevil's inimitable guitar touch. Marc Antione, a master of the Flamenco guitar, plays on "En Fuego." Virgel, a West Indian via Paris vocalist/percussionist sings on "Universal" and "Brazilian Love Affair," the latter a cover of a 1980 George Duke tune, which features him and Katia in improvisational mode. He and Katia reunite again on songs "Clouds," a journey from a rainforest to the Carnival and "Sonhando" (translated to "dreaming" in Portuguese). Peruvian singer Violetta Villacorta's haunting vocals permeate "Estoy," bolstered by the dub-heavy effects of Andreas Allen. Additionally, Terence Trent D'Arby, under the guise of Sananda (Jez mixed and did production for his current album, Wildcard), collaborated in the writing of the track "Windows," a dance cut featuring a piano montuno. Nueva Musica ends on the spiritual high of "Rio Negro," a voyage of discovery down the "Black River."

"It's probably better now than at conception," states Matt. "We weren;t taking it quite so seriously then--there was just tracks that came together. Now we can say we did a record and we're pretty pleased with it."