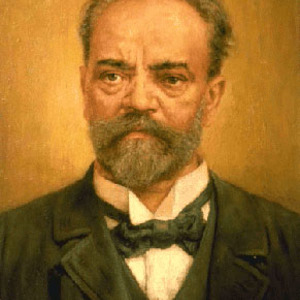 Anton?n Leopold Dvo??k (1841?1904) was a Czech composer of romantic music, who employed the idioms and melodies of the folk music of Moravia and his native Bohemia. His works include operas, symphonic, choral and chamber music. His best-known works include his symphonic works (above all "New World Symphony"), Slavonic Dances, String Quartets, Concertos for cello (Concerto in B minor) and violin, oratorial compositions Requiem, Stabat Mater and Te Deum.

Dvo??k was born on 8th September 1841 in Nelahozeves, Czechia, near Prague, where he spent most of his life. He studied music in Prague's only Organ School at the end of the 1850s, and slowly developed himself as an accomplished violinist and violist. Throughout the 1860s he played viola in the Bohemian Provisional Theater Orchestra, which was from 1866 conducted by Bed?ich Smetana. The need to supplement his income by teaching left Dvo??k with limited free time, and in 1871 he gave up the orchestra in order to compose. He fell in love with one of his pupils and wrote a song cycle, Cypress Trees, expressing his anguish at her marriage to another man. However, he soon overcame his despondency, and in 1873 married her sister, Anna ?erm?kov?.

In 1891 he wrote the famous Requiem Mass, similarly as Stabat Mater and Te Deum his major sacred work. Composition is a reflection of generally alarming questions of human being. The opus shows much of the tonal colour, original instrumentation, impressiveness and purity of composer?s mature work.

From 1892 to 1895, Dvo??k was the director of the National Conservatory of Music in New York City. The Conservatory was founded by a wealthy socialite, Jeannette Thurber, who wanted a well-known composer as director in order to lend prestige to her institution. She wrote to Dvo??k asking him to accept the position, and he agreed, providing that she were willing to meet his conditions: talented native American and black students, who could not afford the tuition, had to be admitted for free. She agreed to his conditions, and he sailed to America.

It was during this time as director of the Conservatory that Dvo??k formed a friendship with Harry Burleigh, an African-American, who became an important composer. Dvo??k taught Burleigh composition, and in return, Burleigh spent hours on end singing traditional Negro spirituals to Dvo??k. Burleigh went on to compose settings of these spirituals.

In the winter and spring of 1893, while in New York, he wrote his most popular work, his ninth symphony "From the New World". Following an invitation from his family, he spent the summer of 1893 in the Czech-speaking community of Spillville, Iowa. While there he composed two of his most famous chamber works, the string quartet in F major ("The American"), and the string quintet in E flat major.

Also while in the United States he heard a performance of a cello concerto by the composer Victor Herbert. He was so excited by the possibilities of the cello and orchestra combination displayed in this concerto that he wrote a concerto of his own, the cello concerto in B minor (1895). Since then the concerto, considered one of the greatest of the genre, has grown in popularity and is frequently performed today. He also left an unfinished work, the cello concerto in A major (1865), which was completed and orchestrated by the German composer G&uuml;nter Raphael between 1925 and 1929, and by Jarmil Burghauser in 1952.

He eventually returned to Prague where he was director of the conservatory from 1901 until his death on 1st May 1904. At the end of his life, Dvo??k was in serious financial straits, as he had sold his many compositions for so little he had hardly anything to live on. He is buried in the Vy?ehrad cemetery in Prague.