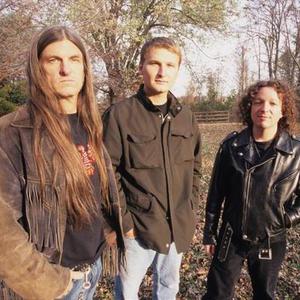 Scott "Wino" Weinrich (Saint Vitus) was faced with a hard choice in the Spring of 2002 after the untimely demise of Spirit Caravan after five years of hard work: go ahead and hang up his guns, or yet again find new blood and continue. Wino picked up the phone, and in the same breath told engineer Bruce Falkinburg about the end of Spirit Caravan and asked him if he would like to get together and jam a bit.

Bruce was stunned when he heard the message: it is not every day someone like Wino calls to see if you want to "jam." Wino had seen Bruce play a bit while getting tones for earlier recordings, and the two had many conversations during long nights in the studio about Mesoamerican mythology, ancient tube amplifiers, and contemporary politics.

After a few rounds with various drummers, Bruce called longtime client, and current band-mate, Dave Hennessy (guitarist in OstinatO) to "sit in" on the drums. Dave knew nothing of Wino's past or discography, and brought a fresh but loose high energy to the jams. After a few hours, jams became songs, and after a few weeks, songs were recorded and sold, namely, "Falconstone," for the High Times Magazine Stoner Rock Collection. The Hidden Hand was born. Soon the new band had a set of material together, produced the "Desenstized" 7" on McCarthyism Records, and started getting show offers, performing publicly on New Year's Eve, 2002, for the first time in front of an eager crowd at The Ottobar in Baltimore, MD. The music had Wino's classic doom-tinged flavor, but a new level of intensity brought about by Bruce's added arrangements and vocals, and Dave's aggressive drumming. Lyrics came right from the headlines as the U.S. plunged closer to war in Iraq. "We're a protest band," Wino once commented.
Two weeks later the band was in Bruce's studio again, banging out the arrangements for what would become Divine Propaganda, co-released on Meteor City Records in the U.S., and Exile On Mainstream Records in Europe. Within days of the completion of the recording, The Hidden Hand hit the road with Clutch and Suplex. Favorable critical reviews were pouring in for the band's intense live shows and challenging new material.

The band hopped on a plane and disembarked in the heart of Europe in the Summer of 2003 hot on the heels of the release of Divine Propaganda, shortly after Wino's brief appearances during the St. Vitus reunion shows in Chicago and Germany. After three weeks of constant shows all over Europe, the band took on an improvisational quality to stretch out their relatively short set to appease rabid European fans who wanted more. This became a feature of live performances and soon found its way into the songwriting.
This improvisation was captured on tape in the songs "Five Points" and "Welcome To Sunshine" and released as a 12" split EP with local cohorts Wooly Mammoth as Night Letters, on McCarthyism, Meteor City, and E.O.M. in the late Fall of 2003. Not slowing the momentum, The Hidden Hand produced "Rebellion" for release on the Doom Capital compilation on Crucial Blast Records and soon hit the road again with Clutch, Nebula, and then up-and-comers Mastodon in early 2004.

After a two week break, Dave, Wino, and Bruce locked themselves in the studio again. Utilizing their ability to improvise, they jammed and taped for two months and began crafting material for the full-length Mother Teacher Destroyer, recorded in May 2004 at Bruce's studio in College Park, MD, with Producer J Robbins at the helm. The new songs grew directly out of the methodical jams and taped ideas and didn't come to full fruition until the final tape was rolling. Lyrics grew from outright protest material to encompass more spiritual and esoteric themes, embodied in the magnificent cover artwork by John Baumann. After a few local shows, and another short run out to the Midwest with Clutch, the band hit Europe again, joined by Dave's band Ostinato, in the Summer of 2004 to support MTD, released in the U.S. on Southern Lord Records, and Exile on Mainstream Records in Europe and the UK.

The late fall of 2004 proved to be tumultuous and busy for the band, especially Dave, as reality began to rear its ugly head in terms of jobs and time, and other projects materialized, namely David Grohl's Probot which saw Wino in two MTV appearances alongside Grohl, Lemmy of Mot&ouml;rhead, and Eric Wagner of Trouble.
Wino and Bruce sensed Dave's frustrations, and asked him if he would be happier not being in the band, and Dave amicably agreed playing his last show in January 2005 at The Black Cat in DC supporting the nearly reunited Pentagram. Bruce had already been in contact with friend and previous recording client Evan Tanner to possibly fill in if things with Dave grew sticky. Evan had agreed to learn a few songs and be available to fill in if Dave could not do a particular short run of shows or another tour.

Evan and Bruce met in the studio back in 1998 and 1999 while Evan was playing drums in Cross My Heart, on Deep Elm Records. Evan was already in Bruce's pantheon of miraculous drummers, and did time in the P Tanks, Latebloomer, Cross My Heart, and, more recently, Liar's Academy on Equal Vision Records. Evan also did some time with Reverend Jim of Sixty Watt Shaman fame, and members of Jesuseater and National Razor in the short-lived heavy project The Devil You Know.

Evan arrived at the first rehearsal already knowing several Hidden Hand songs, and immediately joined the band, committing to a new writing project and a three week U.S. tour with Mastodon later that spring followed by a short run with YOB. The tours brought together a tighter fresher sound and a meaner more stream-lined performance, as can be seen and heard on the Devoid of Color CD/DVD limited-edition release on Southern Lord Records which showed a radical departure in songwriting, lyrics, and imagery that was meant to serve as an introduction for Evan and a new direction for the constantly evolving band.

The Hidden Hand stayed busy in the fall of 2005, finishing the recording and video editing for Devoid of Color, and doing short tours with Japanese psyche-sludge band Boris and Sunn))O. The band ended 2005 with a bang at the legendary 9:30 Club in DC supporting Clutch, along with Fireball Ministry and Wooly Mammoth.
Evan, Bruce, and Wino are now in the process of putting together material for a new full-length they plan on recording later this Spring to be released on Southern Lord Records. The project is yet untitled.

On the 24th August 2007 it was announced that The Hidden Hand have split. Scott "Wino" Weinrich has said that he's now to concentrate on new project Shrinebuilder. No more details are known at this point.

The Resurrection Of Whiskey Foote