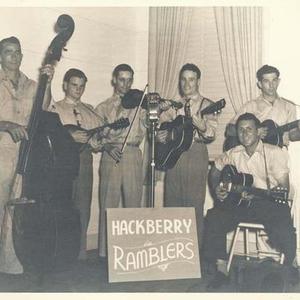 The Hackberry Ramblers (also known as the Riverside Ramblers), a Grammy Award-nominated Cajun music band based in Hackberry, Louisiana, formed in 1933. Since its heyday in the late 1930s it has become one of the most recognized names and influential groups in Cajun music. Its sound has come to be one of the genre's most imitated, and its 1936 song "Jolie Blon" ? the group's most covered song ? ranks as the informal "Cajun national anthem."

The group, which continues to tour and perform, has one of the longest histories of a musical group in the United States of America, and while its lineup has changed many times since its conception, its founders ? fiddler Luderin Darbone and accordionist Edwin Duhon ? led the band until Duhon's death in 2006. (Darbone died November 21, 2008.) While the roots of the band lie in its Cajun music repertoire, the Ramblers perform a broad swath of American music, from Western swing to blues and rockabilly, and much of their sound blends them all.

The Country Music Hall of Fame has honored the group; it holds enshrined many of the founding members' instruments.