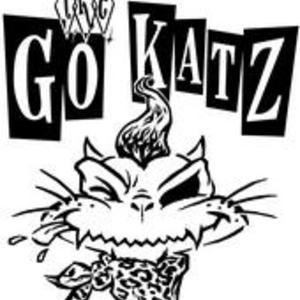 The Go-Katz were originally formed as a five piece band in 1986. Howard Raucous (v), Giles "Beaker" Brett (g), Mark "Moff" Moffat (b), Andy Young (g) and Johnny "Wolf" Basford (d) decided to form The Go-Katz after they met in a bar in Loughborough, UK. Because the band wasn't a big factor in the London Psychobilly circuit at that time, Howard decided to release their first EP on his own. Howard?s "Raucous Records" had already started as a mail-order service, and so a new record label was born. In 1988, they continued without the rhythm guitar of Giles Brett and Dave replaced Wolf on drums.

The Go-Katz play classic mid-80s Psychobilly, based on up tempo Neo-rockabilly, mixed with Punk energy and the avoidance of 50?s-typical Rockabilly lyrics. The band suffered through some line up changes, but Howard Raucous has always continued to keep the Go-Katz alive, performing with a Russian band called the Bombers in 2000. A new UK version of The Go-Katz played a comeback gig at a Psychobilly festival in Spain. This line-up (Howard Raucous (v), Graham Bateman (g), Jez Jordan (b) and Steve Clark (d) ) lasted until 2008, and released a CD called "Maniac" (RAUCD215)

Then in 2009 the Go-Katz returned once more, and the current line-up is Howard Raucous (v), Steve Clark (d), Dan Clark (b) and Billy Oxley (g). Now with a long-awaited stable line-up the band is gigging regularly and has released a CD called "It's Not Fair" with a Psychobilly cover of Lily Allen's pop hit "Not Fair" as the lead track.