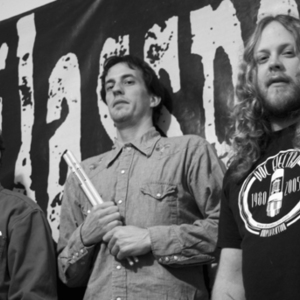 *Formed in the new millennium by singer-songwriter and front-man "Dirty" Dave Johnson, The Glasspack is the answer to the worn-out southern rock of the classic rock airwaves and the sudden staleness of modern hard rock radio. Distinctly of Louisville, this creative and unique Kentucky band has pulled its influences from the best of the 60's jam rock and 70's hard rock/punk, thus obtaining a very wide variety of listeners and fans. The band can usually be found lugging its equipment around the U.S.

and Canada listening to anything from CCR and MC5 to Bad Brains and Fu-Manchu. They have been seen busting guitars on each other, playing guitar behind their backs, with their teeth, and anyway humanly possible. Johnson has even been known to set his crotch on fire, as well as his guitar, which skills gained him a Fender Music endorsement in 2005.

*In 2001, the Glasspack released their first full-length CD entitled "American Exhaust" on Dave's record label, Riverock Records. With this first full-length release, they received distribution in America, Europe, and Australia. After this release and a constant bar touring schedule of 2001, the band started working with Small Stone Recordings in Detroit, best known for its straight rock attitude and releasing new music by musicians from such bands as Screaming Trees, The Melvins, Clutch, and many others. The Glasspack went on to record albums "Powderkeg," "Bridgeburner," and "Dirty Women" for Small Stone Records with guests from Monster Magnet, Big Chief, Hookers, Coliseum, and more. All three records were distributed world wide and received much appraise from local Louisville and global press including the Courier-Journal, LEO, Stonerrock.com, Kerrang, Lollipop, and Maximum RockNRoll. The band has also worked with many other labels to release singles, EPs, compilations, vinyl, and much more to create a very solid back catalog.

*The Pack, as fans know them, has been seen touring and shared the bill with the likes of The Frogs, Isis, Sick of It All, Melt Banana, Down, The Hookers, Five Horse Johnson, Gaza Strippers, Coliseum, Snapcase, Nebula, Easy Action, My Morning Jacket, King Kong, Elliot, AFI, Honky, Valis, Celtic Frost, Boris, Dixie Witch, Totimoshi, and the Shipping News. The band has also been a part of many festivals like the Mountain Dew Action Sports Tour, Initial Records' Krazy Fest, New York's CMJ Marathon, Austin's SXSW Festival, Lebowski Fest, Stoner Hands of Doom Festival, and even headlined a SOLD OUT show at Holland's Legendary Roadburn Festival. Some of the stages they have graced include Headliners (Louisville), the Ritz in Austin (TX), the Garage in Hollywood, the 360 in Toronto, The Double Door in Chicago, 013 Pop Centrum (Netherlands), and last but not least, C.B.G.B.'s in Manhattan.

*The bands music is a popular in the area of licensing from Small Stone Records directly and Rumblefish Music Licensing in Portland, OR. The Glasspack's music can be frequently found in various episodes of MTV's "Viva La Bam" and "Homewreckers" shows, FOX's "Fuse T.V." and "Fuel T.V." shows, FX's "Sons of Anarchy" show and even video games like Discovery Channel's "Monster Garage" by Activision and ESPN's "2K5 Pro Baseball," scoring them a spot in the ASCAP society.