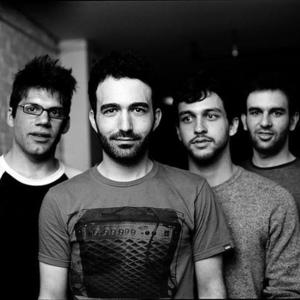 1) Antics began when singer songwriter Adam Weiss met multi-instrumentalist Jason Desiderio during their internships at an audio post production studio in Manhattan. Adam had been sitting on a collection of songs he'd written, and when Jason introduced him to longtime friend and guitarist Matt Schaefer, the three of them decided to use those songs for Jason's final School of Music recording project at SUNY Fredonia. These recordings became antics' first album, Everything.

Jason and Matt moved to Brooklyn in the summer of 2010 and antics began playing shows in early 2011. With the inclusion of Ian Carroll on drums and David Saracino on bass, antics has been writing songs as a five piece complex indie rock outfit, and will record their second LP during the summer of 2012.

2) Antics is a Post-Rock/Indie band from Miami, FL. They released their debut "Antics EP" in May of 2011.

"(Kris Alvarez [Vocalist/Guitarist], Sebastian Hidalgo [Guitarist], Gabriel Valdes [Bass], and Javi Cuarezma [Drums]) do their name justice by performing wild music that demands your full attention. The fact that they are also some of the nicest, most down-to-earth people you'll ever meet is just a bonus.

In 2010, they arose from the shambles of ?Big Brat?. The music is a change of pace from what you would normally expect to hear from Miami's local scene. It has elements of post-rock and bits and pieces of experimental while still retaining a unique indie vibe. You can tell by listening to them play that they are passionate about their music, but you can also sense the fun they are having."
- Jean Carlos Dominguez

"While Explosions in the Sky might have spawned an army of shitty post-rock copycats, Antics does a remarkable job of making the dense ambient sound its own. It's common and all too easy for long-form rock to bore listeners to sleep, but Antics avoids that pitfall with ?Cynicism?, a track off of the band's six-track EP, Make It Good For The Cameras [He meant the Antics EP], that showcases singer Kris Alvarez's muscly pipes."
-Beached Miami (Top 50 South Florida Songs of 2011 #41 Cynicism)

3) Antics aka. Elvin Vanzeebroeck was born and raised in Brussels, Belgium and has always had musical direction with a love for old school and underground hiphop and a notable influence from his dad who used to spin early reggae and dub at home. Elvin is a busy man running his own night called Midnite Run and also hosts a radio show every friday 4-6 pm GMT on Rood FM. Most recently, Antics has released his track Unconscious on the Angles Compilation album from the Orientis label which is quite rightly doing very well in the dubstep charts.