The Ecstasy of saint theresa 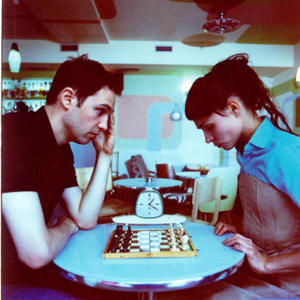 The Ecstasy of Saint Theresa is a rare band formed in 1990. In their own unique way, they have always attempted to find their own sound and expression with which they have jointly dictated the direction of alternative music in their homeland of the Czech Republic. The band's cult status there was primarily acquired through strong, emotional music that was open to various influences. From the charm of their original indie guitar sound (imagine a prototype Mogwai) they have now evolved into a group producing distinctive, instinctive electronic music that spans the musical spectrum.

They are one of a small number of Czech groups who have managed to win recognition abroad. They are the only Czech group to have held their own in England, where, in the early 1990s, they made it into the independent charts and recorded a celebrated session with the legendary John Peel. They released three records on the Go! Discs label - the Fluidtrance Centauri EP made it to number 6 in the British independent charts shortly after its release - but the group's promising start was scuppered when its record label Go! Discs was bought in 1995.

In the Czech Republic, however, the charismatic duo at the heart of the band have gone from strength to strength. A casual glance at most guide books to the country notes them as one of the country's most important domestic acts, the group achieved considerable success with their 4B4 set, which was composed of their first four records. This retrospective collection became part of the Absolut Album series, which also included classic albums from the likes of David Bowie, the Sex Pistols, Velvet Underground and Miles Davis.

Jan P. Muchow, the main driving force behind the band, is now a much-sought-after producer and re-mixer. He has also been successful as a writer of music for film and theatre. His soundtrack for the film Samot??i (Loners) became a cult classic for a whole generation of listeners, while his musical rendering of Shakespeare's A Midsummer Night's Dream also attracted much deserved attention. Kate?ina Winterov&aacute;, who is also a member of the National Theatre Company, makes up the other half of the band.