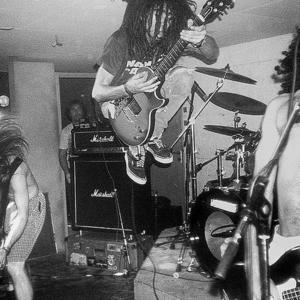 The Doughboys NJ: Maybe there was something in the water. Scratch the surface of anyone who was a teenager in Plainfield, New Jersey during the 60's and you'll find yourself being regaled with tales of wonder. Yes, we all have, to some extent, nostalgic leanings when recalling our youth, but there's something different about Plainfielders. The eyes glaze over slightly with glee and smiles of recognition stretch across the faces when asked about the experience of growing up in the Queen City.

Sure, some of it is filtered through a rose-colored lens, but for the most part it really was mystical and magical.

The Doughboys played a role in this collective memory. What set them apart from the competition (and there were many rock'n'roll groups in the area) was an authentic passion for the music and presentation. The band was formed in the fall of 1964 when Mike Caruso asked Richie Heyman if he wanted to get together with a couple of guys from Hubbard Junior High (the school they all attended) for a rehearsal. Mike and Rich clicked right away, Mike on guitar and Richie on drums. The others weren't quite up to par so Mike found two other guitarists, one of whom was Willy Kirchofer, with his big Gibson acoustic/electric ? a rarity in those days ? who blew them away with his playing. They called themselves the Ascots. A year later they merged with two members from a rival group, the Apollos. Rumor was the Apollos were on the verge of splitting up, something about guys going off to college, an eternity away to the Ascots. Richie was only thirteen at the time. He invited guitarist Mike Farina and drummer/singer Myke Scavone to join forces with the Ascots, convincing Myke to step out from behind the drums and become the lead singer. Myke was a great drummer but Richie was already on that throne, so, much to everyone's surprise and excitement, Myke agreed.

The five-piece Ascots changed their name to the Doughboys in 1966 and won a recording contract with Bell Records as part of their first prize winning of a year-long battle-of-the-bands on Zacherle's Disc-o-teen television show. They put out two singles ? Rhoda Mendelbaum and Everybody Knows My Name, which received airplay on WMCA in New York City in exchange for the band playing the weekly Good Guys shows, which were live package performances at various YMCA's and high schools in the tri-state area.

They were the house band at the Caf? Wha? in Greenwich Village during the summer of '68. Their signature song was a cover of Bo Diddley. Richie would come out front with his floor tom and Myke would grab another floor tom, and with maracas gripped firmly in hand, they'd beat the living shit out of those drums while shaking every limb on their skinny bodies. It was all on one chord, but they rode that groove into a flight of fancy and frenzy.

The Doughboys stayed together until the end of the decade, as a four-piece and finally as a three-piece configuration. As the 60's faded into memory, so did the Doughboys and the founding members went their separate ways. Myke Scavone joined Ram Jam, who had a hit with Black Betty, toured the world and even appeared on Don Kirshner's Rock Concert TV show. Willy played in various bands, including Jake and the Family Jewels, and formed his own country & western outfit, Willy and the Wranglers, in the 80's. Mike Caruso played sessions with Tommy James, producers Bo Gentry and Kenny Laguna, and jammed with Jimi Hendrix and Buddy Miles. Mike Farina moved to California and got involved with television production. Richie commenced a career as a solo singer/songwriter. As the decades passed, Richie continued to tell stories of the Doughboys to his friends and wife Nancy, until finally, in the year 2000, Nancy decided she wanted to see the band for herself, called Myke, Mike and Willy, and organized a reunion gig.

The moment they set foot onstage together, the years melted away and they were the tight, rockin' unit they were back at the Cook School dances in '67 once again. They started gigging on a semi-regular basis and having a great time. Sadly, in 2005, Willy passed away after a short illness. He was a tremendous talent and the sweetest guy in the world. He is greatly missed by all who knew him.

Guitarist Gar Francis had played in Willy and the Wranglers, and grew up in North Plainfield. As a kid back in the 60's he used to come to Doughboys' gigs and was a big fan of theirs. He's on the same wave length musically and is a sensational player with a style of his own. He's done session work with Billy Idol (that's him on Billy's hit version of Mony Mony), Jerry Ragovoy (who wrote Piece Of My Heart and Time Is On My Side under the pseudonym Norman Meade) and played in renowned Stones tribute band Sticky Fingers. The Doughboys wanted to keep rockin', and so asked Gar to come aboard. Even though Willy could never be replaced, it's like Gar's always been with them, too.

The next logical step was to get the Doughboys down on tape (or hard drive, as the case may be today). This album is a record (pardon the pun) of who they are and how they sound, doing both great obscure songs from the past as well as their own immediately classic originals. A session with Willy back in '03 was resurrected and tunes from that day are likewise included on this disc.

It took a while to get from Rhoda Mendelbaum to Is It Now?, but don't let any more time go by ? get groovin' to the Doughboys today!