The Dignity of Labour 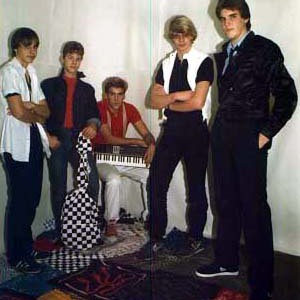 Kirk Taylor began writing music while in his early teens, and the Casio MT-68 served as his first instrument. Along with friend LT, Taylor wrote dozens of instrumental pieces that served as an outlet for their creative aptitude, until inevitably lyrics came into play. In the mid-eighties, Taylor and LT formed a 5-piece band, Prophet, that performed a one-off gig at a high-school event. The band would perform with various line-ups under their new name The Dignity of Labour starting in 1985.

The band would perform with various line-ups under their new name The Dignity of Labour starting in 1985. Taylor moved to California in mid 1989 and TDOL became a project under his direction, occasionally performing live with supporting musicians but generally existing in the studio amidst a cache of electronics.

In 1992, TDOL released the album Tired Hands, a collection of vocal ballads and instrumentals written over the previous five years. The album was originally released on cassette in limited quantities, but was re-released on CD in 1994 with four additional tracks. The release garnered some regional success, including an enticing offer by talent scouts Barefield and Vierra, and inclusion of the track La Belle Le Anna on a syndicated compilation disc. Taylor knew his future lay in electronic pop music.

By 1994, Taylor had moved to Denver, Colorado, where he began work on the second TDOL album, Belief. The basic tracks were recorded in Taylor's studio then mixed and mastered at Colorado Sound Studios. Belief was released in December 1997 through international distributor Joe's Grille and was available from various record stores in Colorado. The album was also sent to several labels that cater to electronic musicians. Despite favorable reviews praising TDOL for its accurate depiction of 80's-style electronic synthpop, TDOL decided not to actively promote the release through club gigs or radio airplay. Nevertheless, the tracks Shores of Eternity and Echoes caught the attention of a major record label in Europe.

Fast-forward to August 2002. Taylor submitted a post to a musician's mailing list, asking if anyone would be interested in producing/engineering the next TDOL album. He received several offers, including one from Colin Mansfield, a veteran jack-of-all-trades from St. Paul, Minnnesota. After a few weeks of e-mails and song-swapping, they decided it would be a great idea to work together. Given that Colin had a lot of experience in ambient music, Taylor was excited to see how these songs would come together. In March 2003 he spent a week in St. Paul with Colin and engineer Bob Cain at Ambient Sound, recording the first handful of demos for the new album. Response from those close to Taylor encouraged him to submit the tracks to several independent electronic-based labels in the US and Europe. Among those who responded with contract offers was synthpop label kingpin, A Different Drum, who offered him a one-single/one album deal. In June 2004, ADD released the debut single XRV to critical acclaim.

Taylor recently completed his third album. This self-titled effort explores further the mix of incisive lyrics and techno beats. Here, TDOL ventures into foreign territory, voicing the third person in some instances, disguising the song's identity through allusions to science and technology, while pushing the emotional envelope. The album was released in September 2005.

The Dignity of Labour