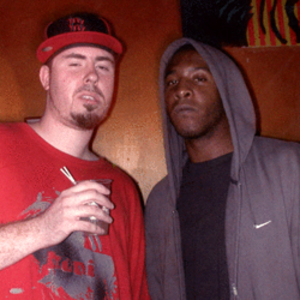 The Devil'z Rejects are comprised of two main members; Boston native, 'Bomshot' and former Jedi Mind Tricks member, 'Jus Allah.' The 'Necronomicon' project started off with a friendship and mutual respect between these two aspiring artists who at one time were label-mates on Boston based Indie hip hop label, Omnipotent Records. The outright ingenious lyricism of Jus Allah and the overall creative direction of Bomshot resulted in an incredible album that pushes creativity in the hip hop realm to a place rarely seen today.

'Necronomicon,' is an overwhelming task of acheivement primarily on the part of Bomshot, who despite incredible odds, planned its release despite label, group, and personal-life drama. Unfortunate fall-outs with Omnipotent Records and Jus Allah threatened to seal Necronomicon's fate until NYC based hip hop label, Dynasty Muzik came into the picture. Upon hearing the album and the story behind its creation, Dynasty Muzik and Bomshot decided to release 'Necronomicon' despite the dramatic circumstances involved. 'Necronomicon,' has finally arrived and it couldn't have picked a better time..