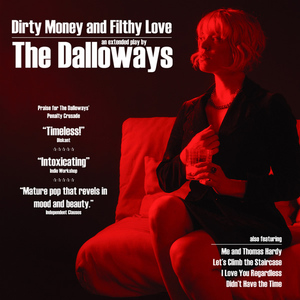 Who are The Dalloways? Dapper dreampop revisionists with a lush 60's inspired synth pop sound and a wealth of lyrical tales to tell. Must be some sweet ether in that Central California air. Fiction writer turned songsmith Gerhard Enns, keyboard counterpart Cortnie Enns, and the rest of this five-piece tell tales of love and loss, of vapid teen stars, child rebels and jilted lovers moving to Warsaw.

And everywhere a slightly melancholy air, the kind you feel when you dream of distant fairs under dark and starry skies. The Dalloways are akin to alt. pop acts such as The Dears, Belle and Sebastian, and Stars.

In 2005 The Dalloways produced and released their premier full-length CD, Penalty Crusade, a Brit pop inspired album critics hailed as "timeless" (Diskant), "intoxicating" (Indie Workshop), "mature pop that revels in mood and beauty" (Independent Clauses). PC garnered scores of critical reviews and landed among Earfood's "Top 20 of 2005!" alongside Death Cab for Cutie, The Decemberists, Broken Social Scene, and British Sea Power. The band accompanied the album's release with a tour of major cities throughout the Western United States.

The Dirty Money and Filthy Love EP (in eco-friendly CD sleeve) is the latest installment in The Dalloways discography. The five songs on this album feature the classic Dalloways penchant for lyricism and mood, but push beyond the melancholy of the band's debut album and into an upbeat drive more akin to Canadian pop. The Dalloways plan U.S. and European radio and press supported tours of the EP.

What's next? The Dalloways are polishing their latest full-length entitled Distant Fairs, a collection of tunes melding the band's post-punk edge with 60's British game show-inspired pop. Big Wheel Magazine has recently predicted that Distant Fairs is "sure to be a masterpiece alongside ? Penalty Crusade."

"An intoxicating mix of old and new styles that rarely fails to deliver something memorable." ? Indie Workshop

"Mature pop that revels in mood and beauty." ? Independent Clauses

"Manages to find the sweet ether where California coolness ends and the emotional reverb of '80s British rockers begins." ? The Bakersfield Californian

"The musical arrangements are rich and are so beautifully put together that I hear something new every time I listen." ? Planet of Sound

"Take the haunting lyrical wisdom of Lloyd Cole and slam it with double-sided Velcro tape to Morrissey's melodious singing and songwriting and you will have a hint of what this band is all about."