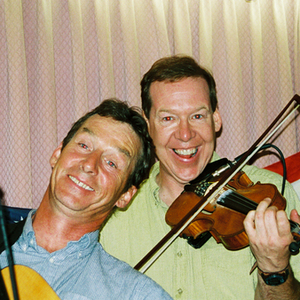 The Dady Brothers are an Irish folk band based out of the Rochester, NY area, comprised solely of brothers John and Joe Dady. They are locally famous for their engaging live shows as well as their yearly tours to Ireland. The brothers play a mixture of classic irish ballads, music by modern folksingers such as Bob Dylan and Tom Clancy, as well as their own original works inspired by the Celtic sound. Songs are generally acoustic in nature although electric guitar and bass are occasionally used.

Both brothers are adept at several instruments including the guitar, flute, bodhran (traditional irish goatskin drum), fiddle, and mandolin. Live shows include a great deal of audience participation and Joe Dady's famous grandstanding, such as playing the pennywhistle with his nose, the violin over his head, or the guitar behind his back.

Let Us Adore Him