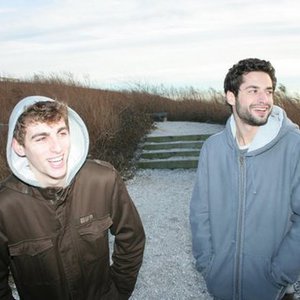 The Curtana Veil is a band, a story, an idea that represents the importance of not forgetting where you come from and the experiences that lead you to become who you are. Original band members Ryan Kanterman (Guitar and Vocals) and David Kaplan (Bass and Vocals) live with the "every step taken is another lesson learned" mentality and translate daily events into musical and lyrical imagery that you can only find in extraordinary and unforgettable dreams.

Rather than listening to the words being sung, you feel them being told to you like a story that sends chills down your spine and through your body. Each song is a tale within itself, composed with an arsenal of metaphors that derive from an imagination that is unmistakably out of the ordinary.

The two founding members of The Curtana Veil grew up together on Long Island, NY. Throughout the years they played in different bands, which led to the development of their separate musical styles and prepared them for their inevitable reunion in the summer of 2006. Collectively, the members of The Curtana Veil have toured the eastern cost of the United States and London as well. They have played with such national acts as Fall Out Boy, The Early November, Matchbook Romance, Armor For Sleep, Days Away, Hidden In Plain View, Allister, and Bayside.

Over the summer of 2007, Kanterman and Kaplan hit the studio to record their self-titled EP. They recorded at General Studios in Douglaston, New York with producer George Fullan who has worked with The Rolling Stones, Twisted Sister, Cyndi Lauper, Dream Theatre, Taking Back Sunday, Action Action, and The Color Fred. "Our vision was to have it sound raw, not overly produced, but real close to how you would hear this shit live," said Kanterman after the first studio session. After recording with a slew of vintage amplifiers and instruments, this was exactly the sound that emerged. The songs on the EP are part of a larger story about a man's journey into the unknown, where reality blends with imagination, forests are breathing entities filled with beautiful goddesses, and light exudes through Earth's atmosphere to paint Fate's "starlit way."

Look out for upcoming tour dates in the near future.