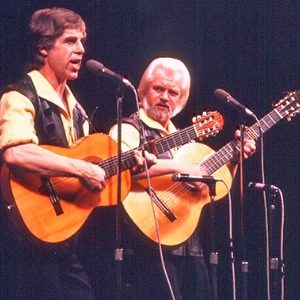 The Corries were a Scottish folk group which emerged from the Scottish folk revival of the early 1960s. Although the group went through several changes of line-up in the early days, it was as the partnership of Roy Williamson (1936 - 1990) and Ronnie Browne that it is best known. The early 1970s were the Corries' finest hour. In 1962, Roy Williamson teamed up with Bill Smith and Ron Cockburn to form the "Corrie Folk Trio".

In 1962, Roy Williamson teamed up with Bill Smith and Ron Cockburn to form the "Corrie Folk Trio". Their first performance was in the Waverley Bar in St Mary's Street, Edinburgh. After a few weeks Cockburn left. They had already accepted an engagement at the Edinburgh Festival so Williamson suggested that Ronnie Browne should be brought in to make up numbers. They also added female Irish singer Paddie Bell to become the "Corrie Folk Trio and Paddie Bell".

In 1966, Paddie Bell and Bill Smith left the group. Under the new name, The Corries, Williamson, a talented multi-instrumentalist, and Browne, the singer, performed at the Jubilee Arms Hotel in Cortachy, Angus. The early 1970s were the Corries' finest hour.

The Corries became legendary for the amount of instruments that were taken onstage during concerts; between the two members, instruments such as guitars, banjoes, mandolins, bodhr?ns, combolins, harmonicas and tin-whistles were used.

During the Corries' 1989 tour, Roy Williamson's health went into decline and he was diagnosed with a brain tumour. He spent his last years living in Forres, close to where he spent his school years. He died on 12 August 1990.

Ronnie Browne continued recording and moved into acting, as well as expanding his career as a noted painter, including commissions for the 1990 Scottish Rugby team's Grand Slam victory, but has now retired from performing.

In December 2007, The Corries were inducted into the Scottish Traditional Music Hall of Fame at the Scottish Trad Music Awards in Fort William, promoted by concertina virtuoso Simon Thoumire's Hands Up for Trad organisation.

Live at the Royal Lyceum Theatre