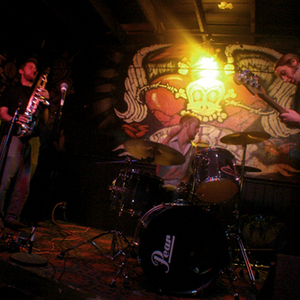 The Clinical Mops are Kevin Campbell (percussion, lyrics) Devin Harper (bass, women) and Justin Williams (winds, effects). The impetus of the Mops arose early in the soon-to-be legendary summer of 2005, when friends Campbell and Williams, then-members of the all-improv band Squeaky Burger, began to isolate the distinctly rhythmic and lyrical improvisational style that had developed through years of collaboration in Squeaky Burger.

Campbell's apartment offered a low ceiling, large closet-size room to facilitate the duo's marathon rehearsals. During reasonable daylight hours, they crafted improvised sax and drum compositions. In mid-summer, the duo would play an improvised live set in collaboration with improv-collective Spirit Journey Formation Anniversary at Brother's in Norman OK. The performance was loosely executed, but proved encouraging to the musicians.

Devin Harper was an acquaintance of Kevin Campbell through the University of Oklahoma Ultimate Club, the ?Apes of Wrath?. After discovering his classically trained bass expertise in midsummer, the duo immediately offered Devin Harper an invitation to play. In a sweltering jam rehearsal, Devin's disciplined, yet playful style was a godsend. His creative lines melted over and seamed the gaps naturally present in a sax and drum duet, but were not at all intrusive or egoistic. Soon, the trio would meet numerous times a week, where Williams would record every rehearsal. This allowed the members an archive of improvisations to cull through and handpick sections that could be directly used and developed in a semi-structured compositional framework. Using improvised material as the foundation for song development would become status quo for the trio. Each member's initial excitement and elation gradually matured into a commitment to a challenging new project by late summer, and song crafting continued as the fall semester began for Harper and Campbell (Williams graduated).

In October 2005, the trio, now The Clinical Mops, would have a set of settled compositions brewed in the newly christened ?Mop Closet? a name that displayed the band's ludicrous affinity for their small rehearsal room in Campbell's apartment. Later in the month, the band collectively took a deep breath and recorded a 7-track album with producer/engineer/sorcerer Carl Amburn at the Mousetrap in Norman, OK. Williams and Campbell had worked with Amburn on two previous recordings, Sweet Obscurity by Squeaky Burger, and My Life is not a Sick Hum by Bill's Molehill. The compositions on The Clinical Mops' album Why Would The Wall Shift But Not The Stove? would define their signature sound; whether it would be called jazz, groove jazz, freakjazz, jazz-funk, low-frequency jazz., or jazz with benefits. Incidentally, the name of the album was inspired by an occurrence at 743 Debarr Ave in Norman, OK. Campbell sat, bored, on the third floor of the house, in the summer of 2005. As he stared at the screen of his brother's laptop, the entire floor alarmingly dropped 1-2 inches without warning. Slightly less bored and now hungry, Campbell retreated to his apartment on the second floor to make some toast. However, he immediately noticed the wall plug for the toaster had sunk halfway below the top of his floor-bolted stove. At this point, Campbell's brain formed the question of ages; which was later offered a halfway-satisfying answer: The critical structure-bearing elements of the house were in the process of replacement by workers in the basement, so it was really the entire three-story house that dropped 1-2 inches. But does that effectively answer why the wall would shift, but not the stove? As evidenced by the wall plug dropping below the stove, instead of the stove dropping with the wall proportionally, sustaining Campbell's ability to make toast. The question deserved more than just a whimsical consideration.

Why Would the Wall Shift, but Not the Stove?