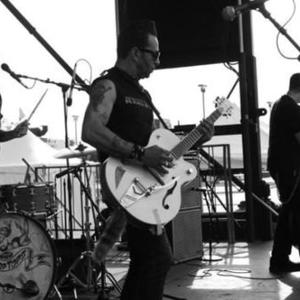 Their Story- Sinner began The Chop Tops back in 1995, he had tried a range of other musical styles, only to return to what came naturally to him...rockabilly music! Sinner had played guitar, bass, and piano while performing as lead vocalist for his group. But it wasn't until he went back to his child-hood favorite the drums (standing no less) that he had found his true call, still soulfully covering his ground as lead vocalist.

Sinner next teamed up with grestch guitar extraordinaire Shelby after seeing one of his blistering guitar performances. Shelby shared Sinner's passion for a frantic rock'n'roll beat and was quickly welcomed as the bands guitarist. Last, but not least, came the search for an upright bassist that would glue The Chop Tops stompin' vocalist/drummer and live-wire guitar slinger together into one red-hot rockin' act. And their prayers were answered when Brett joined adding the finishing touch to the 'Revved-Up Rockabilly' trio - The Chop Tops. Brett had perfected his wild stage shows while performing upright slap bass with tons of LA groups! A few years later, the band really began to make a name for themselves playing supporting sets for rock'n'roll legends, but with all the showmanship and excitement of the evenings headliner! The Chop Tops continue to tour their 'Revved-Up' breed of rockabilly music through the entire United States.

Their Sound-
As a band, The Chop Tops thrive on an up beat rockabilly sound; they've coined the phrase "Revved-Up Rockabilly" to describe their unique blend of rebel music genres. Their material spans from rockabilly, teddy boy, psychobilly, (western) surf, to old school punk all played with their own edge! Over the years they have annihilated the lines between these music genres by not just introducing their fans to Chop Top style arrangements of multi genre covers, but also by sharing the stage with the biggest names in the rockabilly, teddy boy, psychobilly, surf, & punk scenes. This three piece combo is like none before it's time, delivering scorching sets of original, high-octane roots rock'n'roll, while bringing alive the sounds of yesteryears highway honky-tonks, backyard blues bands, & hardcore punk halls with their own powerful punch! You can currently find The Chop Tops anywhere from a smokey blues bar, to an all ages punk show! The Chop Tops would like YOU to know?

They don't play music to LOOK cool (that's easy) they play music that IS cool! But don't trust me get in your ride, step on the gas, and race down to see 'em play...you'll be glad you did!!

Meets The Sure Shots