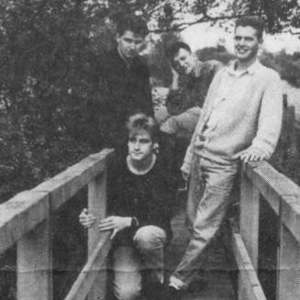 For a while, the Chesterfields' charming, jolly guitar pop, was very much in vogue. They were formed in Yeovil, Somerset, England, in the summer of 1984, by David Goldsworthy (guitar/vocals), Simon Barber (bass/vocals) and Dominic Manns (drums). In 1985 they were joined by guitarist Brendan Holden. They contributed 'Nose Out Of Joint' alongside a track from Scotland's Shop Assistants, whom they joined at Bristol's Subway Organisation Records in time for the EP A Guitar In Your Bath ( 1986), four slices of frothy guitar pop.

'Completely And Utterly' continued the formula, but for the next single, 'Ask Johnny Dee' in 1987, the Chesterfields offered a less abrasive style. Kettle showcased the band's songwriting talents admirably. Back in April, Holden had left the band, and was temporarily replaced by Rodney Allen (later with the Blue Aeroplanes) and former Loft guitarist Andy Strickland (on loan from the Caretaker Race). A more permanent guitarist was later found in Simon's brother, Mark Barber. A compilation of the band's singles, Westward Ho, coincided with the release of their session for BBC disc jockey, Janice Long. A month later, the band set up their own label, Household. In March 1988 they issued 'Goodbye Goodbye' a more melancholy offering than previous efforts. This was followed by 'Blame' and a new album, Crocodile Tears. The latter was not as warmly received as Kettle and both Goldsworthy and Manns left soon after. The Chesterfields continued with Simon and Mark Barber co-fronting the band, assisted by various drummers and guitarists, before splitting up in July 1989. Their last offering, 'Fool Is A Man', was perhaps their finest moment. Simon went on to front Yeovil-based Basinger, while Mark led the Bristol-based Grape.