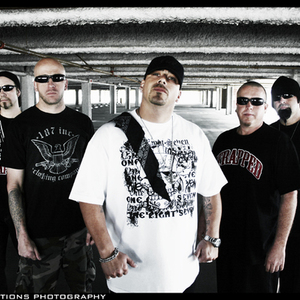 The Los Angeles -based band. Music Style ? R&V (Rhythm & Violence) 1AD7 started in 2006. Live Performances with National acts include Alien Ant FArm, KottonMouth Kings, Hed P.E., One Side Zero, The Reyes Brothers & Cypress Hill. 1AD7 has sold out such famous venues as the House of Blues Sunset, the Key Club & The Viper Room. The band has taken to the road where they have performed on the ?Bring the Noise Tour? (SubUrban Noise Records), The Pangea Music Festival, Provided all the live music for Pure Combat MMA fights, headlined shows in Lake Havasu, Az for Labor Day Weekend & Spring Break week.

1AD7's music has also begun to see spins in multiple forms of media. Such as Hollywood Music TV, BUZZ Radio, KWSS 106.7 Tempe, Az and 104.1 Fresno, Ca, 103.9 Riverside, Ca, Internet radio stations, Time Warner Cable Tv stations as well as hundreds of hits daily on their web sites. 1AD7 songs Have also made their way into extreme sports DVD's. Glamis Gone Wild 3 features 2 songs from 1AD7, Suicidal Motorsports, a drifting, motorcycle stunt DVD features the song Fight Back and Pure Combat MMA fighting Features 9 Songs and video footage from the event.
1AD7's first self-titled EP (1AD7) continues to receive rave reviews from a cast of critics across the globe. If that wasn't enough, 1AD7, was crowned The Best New Hip Hop Artists of the Year 2006 at the Los Angeles Music Awards and also landed on Skinnie Magazines 25 Best Unsigned Bands list in 2006. Along with the album 1AD7 has made 2 music videos. First video was made for ?Fight Back? and the second video for the song ?WorldWide? which was being filmed currently.
Legendary rap music artist, Mellow Man Ace, took notice of 1AD7's unique style and is now assisting in success of 1AD7. Blending rhymes from the streets with hard rock music reminiscent of the Hollywood heyday with an updated twist. With influences that range from Cypress Hill to Rage, and from TuPac to Slayer, this band has assembled a musical mosaic of quality musicianship and pure passion. By channeling this raw emotion into explosive numbers like ?Why? and ?Fight Back? it creates a driving force of fury that hits its audience like a musical juggernaut. 1AD7's solid songs are only part of its overall allure. Fusing its high-octane material into a captivating live show, the band releases a powerful one-two punch that immediately engages every person in every venue. ?1AD7's stage show is one not to be missed.? Said SKINNIE MAGAZINE in October 2006
1AD7 is primed and ready for the exciting ride ahead. Now, as the band embarks on its exciting ride ahead, they remain fixed on giving the fans the one thing that they desire most? Good music!