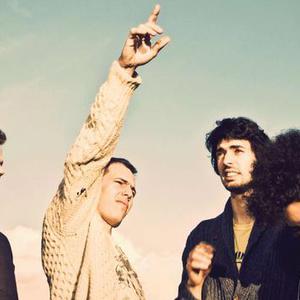 In February 2001 New York performer/comic book artist Jeffrey Lewis was living in Austin, Texas for a few months and then-Moldy Peach Kimya Dawson came to visit him. During that visitation week they made up five songs with Jeffrey on guitar and Kimya on keyboards. In 2002, when Kimya had launched her solo career and was touring Germany along with The Jeffrey Lewis Band, those same five songs expanded into full band songs with the addition of Jeffrey's brother/bandmate Jack Lewis on bass and Anders Griffen (known for his work with jazz great Frank Lowe and Regina Spektor) on drums.

One night while playing in a cold, clammy basement venue, all bundled up in sweaters, hats and scarves, the nascent band became known as The Bundles; Jack and Anders soon got in on the writing of some new songs too. Years passed, during which Jeffrey and Jack released five acclaimed records on Rough Trade, Anders drummed and toured with the likes of Dufus, John Ludington, and Diane Cluck, and Kimya stormed the world, touring constantly with 6 solo albums, and recently celebrating the Grammy-winning Juno movie soundtrack.

Despite the heavy creative schedules of all involved, The Bundles continued to be resurrected in unlikely times and places wherever in the world the members happened to cross paths. Eventually in February 2009 the four congregated to make some full-band Bundles recordings at the Dub Narcotic Studios in Olympia, Washington. With troubadour Karl Blau, originally only signed on as session engineer, they recorded some of the pre-existing songs, along with some new ones that all five starting writing together on the spot. On the last night of recording a couple dozen members of the Olympia Free Choir joined them in the studio as well. So on one hand, their debut album The Bundles [KLP214] took just a few days to write and record, on the other hand it took eight years! Will we hear from them again before 2018?