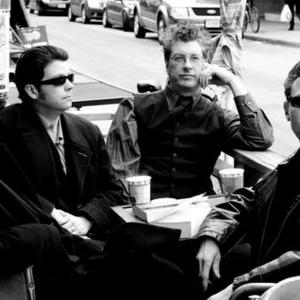 Reviews: Fans of the Handsome Family and 16 Horsepower will find this record a dark, bleak place. That, though, is a good thing. Philadelphia's Broken Prayer create beautifully bleak American Gothic. Narratives about the darkness of the heart, suicide, and a laundry list of other equally grim topics. The band weaves hypnotic, droning, cathartic rhythms around this somber and sinister tales. Peter Marshall (camera man/singer), Tony Bello (trucker/drums), Brian Murray (preparator/bass)...

Fans of the Handsome Family and 16 Horsepower will find this record a dark, bleak place. That, though, is a good thing. Philadelphia's Broken Prayer create beautifully bleak American Gothic. Narratives about the darkness of the heart, suicide, and a laundry list of other equally grim topics. The band weaves hypnotic, droning, cathartic rhythms around this somber and sinister tales. Peter Marshall (camera man/singer), Tony Bello (trucker/drums), Brian Murray (preparator/bass), and Issac Stanford (school teacher/pedal steel) play these songs and stories out as if they are compelled to confess their darkest fears. -- Jeff Weiss, Miles of Music

Every Friday morning one of this first things I do is head to Miles of Music to check out the ?It's A Cracker? selections for the week. Every now and then there will be a band whose samples just jump up and and grab me and I have to buy the cd. Such was the case with The Broken Prayers. I was placing the order for their new cd, Crow, before the end of the first song. There is very little information on the internets about Philadelphia's The Broken Prayers, but they appear to be Pete Marshall and a revolving cast of players (a la Magnolia Elect. Co.) that consist of; Tony Bello Jr, Brian Murray, Fred Stucky Jr., Robert Bell, Jim Callan, Justin Colb, Tony Collins and Scott Danzer. I had thrown the album onto my iPod for the flight up to Boston, so when my flight left Tampa around 6:15 in the morning I qued up the cd for some listening while I slept. Much like when I heard the sound samples on M.O.M., I was immediately drawn into the sparse and minimal Gothic Americana sound the band possesses. Really wanting to capture my initial impressions of the cd, I scribbled the following into my notepad: Lonely and sparse Sounds like they set up a mic on one end of the room and played the songs on the other then mixed it with oodles of reverb?.lo-fi as hell but it works for these songs. ninebullets.net

The Broken Prayers
By Brian McManus

Photo by Robert Lee
When Pete Marshall, lead singer/guitarist for the Broken Prayers, intones ?I got a little black heart and it's full of hate? on the first track of 2008's reverb-laden, lap steel-heavy, banjo-pickin', very excellent Crow, it's mostly sorrow and hurt you hear in his voice. Real sorrow. Visions of Dust Bowl-era depression dance through your head. Dogs howl. This is The Grapes of Wrath on tape?Son House's ?Death Letter? levels of pain. But Crow isn't a complete downer. At times, it's a full-on rockin' stomp, a drunkin' good time. Marshall's plaintive yawp is just one of a hundred different ingredients that give this chili its kick. We asked Marshall about what informs the music of the Broken Prayers, who play live Saturday with another boss-hoss local act, Beretta 76 (show details page 16). He and bassist Brian Murray gave us some insight.

Philadelphia : ?In my job as a photojournalist, I see a lot of ?after midnight' carnage?fires, car wrecks and shootings. The strange hours I keep undoubtedly have an effect on the type of music we play. Our songs often lean towards the dark or brutal side. I once saw the aftermath of a fella who decided to jump from a bridge onto a highway. He was struck by a semi truck before he hit the pavement. When the tarp blew off of his body in the bluster of the night I couldn't help but wonder about the Nerf football in the road next to his twisted body. ?Zoom in,' another photographer on the scene said to me dryly. ?That's his brain.'? P.M.

Dead Man : ?This vision of the American frontier by Jim Jarmusch is by turns grim, absurd and touching. Neil Young's haunting score introduces a cast in shattering bones that would play in any era.? B.M.

My Father's Record Collection : ?It was filled with the music of Bill Monroe, Charlie Pride, the Carter Family and Buck Owens. I spent hours listening to Johnny Cash cuss and sing at the inmates of Folsom Prison. Tennessee Ernie Ford belted out ?Sixteen Tons' with a thunderous basso profundo. Bill Cosby talked about Baby Coach Wheels, Chicken Heart and Buck Buck?setting my imagination to what it was to live in the city. My father, in addition to his sense of music, had a sense of humor. Once I was listening to Roger Whittaker whistle his way around some lost tune. My father walks through the room, turns to me, ?That Roger Whittaker sure is something. And to think that he's whistling through his asshole.' I was six.? P.M.

Once Upon a Time in the West : ?The opening scene to this Sergio Leone movie is absolute cinematic perfection. Gun-toting bad guys wait on the scalding boardwalk of a desert train station while an unseen windmill creeks and whines in a nonexistent breeze. A filthy and stinking Jack Elam traps a fly in the barrel of his gun and holds the weapon to his cheek?comforted by the muffled buzzing. The train pulls in as a parched Woody Strode takes a drink of water that has collected from a slouching and leaky water tower onto the brim of his hat. Boots knock on wooden planks. The train pulls away and a lone harmonica slurs out a discordant and haunting tune. Someone is going to die. If I'm parched and in need of inspiration, I watch Once Upon a Time in the West.? P.M.

Cormac McCarthy : ?Speaks a vernacular few know by heart, yet strikes a subtle terror into anyone who recognizes it as distinctly American.? B.M.

JeffrEy Lee Pierce : ?Maxwell's, Hoboken, N.J. I struck up a conversation with a sandy-haired fella at the bar who seemed to have no shortage of opinions when it came to life, politics and the general state of the world. We talked for a while and he later excused himself, took the stage and showed me exactly how it should be done. I was convinced. I've seen a few bands I would categorize as being hugely influential?16 Horsepower, the Ramones, the Dirty Three, Gun Club and, more recently, Tom Waits. If you were to mash all that together and then snap its spinal cord... well, we don't exactly sound like that, but I'd say that would be a sound worth striving for.? P.M.