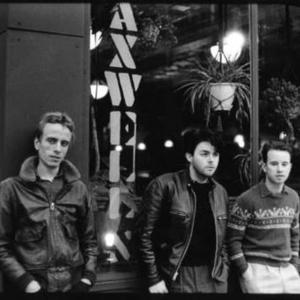 The Bongos were a pop band active in the eighties. They formed in Hoboken, New Jersey and were led by Richard Barone (vocals, guitar). The band also included Rob Norris, formerly of The Zantees (bass) and Frank Giannini (drums). James Mastro (guitar), later of The Health & Happiness Show, joined the band after the release of their first LP. The group grew out of a band called, "a", which had included the three original Bongos and Glenn Morrow, who later formed the The Individuals and helped found Bar/None Records. "a" were the first band to play Maxwell's, a rock and roll club in Hoboken.

The group grew out of a band called, "a", which had included the three original Bongos and Glenn Morrow, who later formed the The Individuals and helped found Bar/None Records. "a" were the first band to play Maxwell's, a rock and roll club in Hoboken.

The Bongos recorded their early singles and their well-received debut EP for UK-based Fetish Records. Their debut U.S. album, Drums Along The Hudson, compiled from the band's British singles, was released in 1982 to mostly favorable reviews on both sides of the Atlantic. While Trouser Press suggested that the group "may trade a certain amount of substance for easy appeal," it added that "there's no better musical equivalent of whipped cream anywhere." Writing in the Village Voice, Robert Christgau dryly commented that "for all their jumpy originality [the songs are] still slight, and Richard Barone's lyrics are so oblique you have to wonder what his angle is." Regardless, in 2007, Jim DeRegotis wrote in the Chicago Sun-Times: "The initial impression of naivete is offset by deceptively simple lyrics that actually hint at deep, dark mysteries and unfathomed mystical enigmas." The group's cover of T. Rex's "Mambo Sun" reached #72 on the Billboard Dance Chart.

In 1983, the group was signed to RCA Records, which subsequently released the album, [album artist=The Bongos]Numbers With Wings. New York Times' critic Robert Palmer -- coincidentally also a former Hoboken-based musician with The Insect Trust -- subsequently marked this as the beginning of the Bongos' creative decline, lamenting the "slick, overproduced records which vitiated the raw vitality the group had originally displayed." However, the album spawned a popular MTV video of the title song (nominated for 'Best Direction' on the first, 1984 MTV Video Music Awards, while the song itself remained at the number one spot on the College Music Journal (CMJ) chart for six consecutive weeks), as well as the tribal, dancefloor hit "Barbarella". Their follow-up album, Beat Hotel, along with relentless touring, raised the Bongos' profile further. The band split up in 1987. Barone subsequently released a series of solo albums, including one currently in progress for 2008 release, and has established a career as a producer of recordings and major concert events.

In 2006, the original three Bongos re-entered the studio with long time fan Moby producing to create bonus material for a CD reissue of the group's debut album. The remastered, 27-track Special Edition of Drums Along the Hudson, which was released by Cooking Vinyl Records in June, 2007, includes rare, live bonus tracks and new studio recordings. An accompanying video for "Bulrushes 2007," a reprise of the band's early single, "The Bulrushes" featuring Moby, was released simultaneously.

The original three Bongos also reunited for two shows at Joe's Pub at The Public Theater in Greenwich Village in October 2006, and two in February 2007. On September 30, 2007, the foursome played again in Hoboken for the first time in twenty years to an overflowing and appreciative crowd, and received a Proclamation from Mayor David Roberts commending them for their contributions to Hoboken's culture and heritage. They headlined a day-long bill that featured the Chris Stamey Group, Glenn Mercer (formerly of The Feelies) and The Health And Happiness Show.

Drums Along the Hudson (Special Edition)