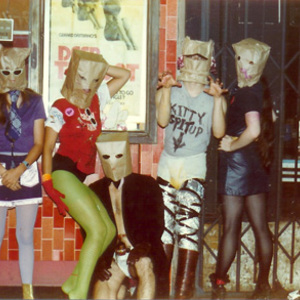 There are two groups called The Bags, one from Los Angeles and one from Boston. 1. The Bags were one of the first generation of punk rock bands to emerge out of Los Angeles. The band was formed by Alice Armendariz and Patricia Rainone, who had met at an audition for Venus and the Razorblades, Kim Fowley's next attempt at creating a band after The Runaways had left him. Alice and Pat decided to form their own band and from this The Bags were born.

1. The Bags were one of the first generation of punk rock bands to emerge out of Los Angeles.

The band was formed by Alice Armendariz and Patricia Rainone, who had met at an audition for Venus and the Razorblades, Kim Fowley's next attempt at creating a band after The Runaways had left him. Alice and Pat decided to form their own band and from this The Bags were born. They took the band's name and their stage names "Alice Bag" and "Pat Bag" from a gimmick that the band used during early performances where they would perform with grocery bags over their heads (the practice didn't last, in part due to an incident where Darby Crash of The Germs ran up on stage and ripped the bag off of Alice's head). Alice Bag was the vocalist and Pat Bag played bass. The band was rounded out by guitar players Craig Lee and Rob Ritter, and Terry Graham played drums.

The Bags played their first show at The Masque on September 10, 1977. The band's live shows soon became legendary. The concerts were riotous affairs including altercations with celebrities, such as one between singer Tom Waits and drummer Nickey Beat at The Troubadour.

By 1979, they had released their first record, a single called "Survive", backed with "Babylonian Gorgon", released by independent record label Dangerhouse Records. "We Don't Need The English" was included on the Yes L.A. punk compilation released by the same label.

After this, Patricia (at this time known as Patricia Morrison) left the band. In 1980 the group, minus Pat, was filmed by Penelope Spheeris for the seminal punk rock documentary film, The Decline of Western Civilization, which also featured The Germs, Black Flag, Catholic Discipline, X and other prominent L.A. punk bands. However, at the release of the film in 1981 the producers billed the group as Alice Bag Band to avoid any conflict with ex-member Pat. By then, however, the band had broken up.

Craig Lee also played with Catholic Discipline, and he and co-member Phranc would perform together occasionally when she embarked on her subsequent solo career. However, Craig is best known as a writer and critic for publications such as Flipside fanzine, among many others, and as co-author of the book Hardcore California: A History Of Punk And New Wave. He died, as a result of AIDS, in the 1980s.

Terry Graham went on to play drums for The Gun Club. Pat, now known as Patricia Morrison, also joined The Gun Club soon after. Once she left The Gun Club Pat joined The Sisters of Mercy and then The Damned, one of the original British punk bands (and the one that was often credited with sparking the LA scene), for which she plays bass. She would also go on to marry the Damned's lead singer, Dave Vanian.

Rob Ritter also joined The Gun Club, and appears on their first LP Fire Of Love, but left to change his name to Rob Graves and form the seminal death rock band 45 Grave, with Dinah Cancer, Don Bolles, previously of The Germs and Nervous Gender, Paul Roessler of The Screamers and Nervous Gender and Paul Cutler. 45 Grave was influential in the creation of goth rock. Rob Graves died in 1991 of a heroin overdose.

Alice Bag went on to join Castration Squad, which included Phranc and Dinah Cancer among its many members. In the 1990s she would form Cholita! with punk rock drag queen Vaginal Davis and the band released several videos. After this she performed with Las Tres and then formed Stay At Home Bomb, her most recent musical project. According to her official website, since the deaths of Lee and Ritter and her estrangement from Morrison, she considers the Bags to be permanently disbanded, and has refused to perform Bags songs in public.

2. Jon Hardy, Jim Janota, and Crispin Wood - all hailing from Lexington MA - formed The Bags in the summer of 1985. They unleashed their unique blend of hard rock and punk on the Boston club scene in September of that year.

In 1987 they recorded and released their debut album Rock Starve. Charles M. Young wrote about Rock Starve in Playboy (March, 1988): "The Bags (from Boston) fall somewhere among the Ramones, Husker Du, and early Kiss. Their debut, Rock Starve (Restless), consists of thrilling guitar-bash riffs that pound like the sound of a herd of giant woolly mammoths going over a cliff, just enough melody rasping though shredded vocal chords and lyrics wholly unbesmirched by any panty-waist college-poetry influence."

In 1989, The Bags released their first single on Stanton Park (I Know / Hide And Seek). They also took top honors by unanimous vote, winning the 11th Annual WBCN Rock 'n' Roll Rumble. Later on that year they released an album on Stanton Park under one of their many aliases, Swamp Oaf. Byron Coley wrote about Swamp Oaf in Spin (February 1990): "This Boston trio (perhaps best known for their non-thug work under the name the Bags) have a sense of compositional burl most redolent of early/mid period Blue Cheer. The guitar quick-switches between ass-puddle wah-boom and overblown zorch-flash with Leigh Stevens-oid flair, and these guys don't get even close to the Zep cliche path most of their "peers" are treading.

In 1990 The Bags released their eponymous LP The Bags, again on Stanton Park. David Fricke wrote about The Bags in the 1990 Yearbook edition of Rolling Stone: "With the grade-A snarl and swagger of their self-titled second album, the Boston raunchers the Bags (Stanton Park LP) are shoo-ins for Kings of Garageland 1990. At their best, the Bags rip it up like the Meat Puppets-meet-Motorhead, a marriage surely made in bar-band heaven."

In 1991 the band released two singles - one for Stanton Park (L. Frank Baum / Max Roach), the other for Italian label Helter Skelter (Dr. Lb. / Frilly Underwear). At the end of the year, after six and a half years of playing together, The Bags celebrated the release of their album Night of the Corn People (Stanton Park / Helter Skelter) by breaking up. The Bags left behind a large following and a reputation as a killer live band.

The Bags reunited once in 1996, headlining the Pipeline! Live Boston Rock on WMBR CD release party downstairs at the Middle East in Cambridge. Brett Milano said of the show in the Boston Phoenix (April 4 - 11, 1996): "In the end, however, the weekend belonged to one band. The Bags were one of six groups DuBrow approached for reunion sets (the others were the Zulus, the Cavedogs, Orangutang, Big Dipper, and Christmas, all of whom declined); on Saturday they played their first official gig (a one-shot, according to guitarist Crispin Wood) in five years. The Bags had a big influence on the current scene, reviving hard rock - not quite heavy metal, but hard, chunky, fist-wavin' Rock - and making it hip again. They also have something that a lot of their successors lack: a three-word phrase beginning with "sense" and ending with "humor." Although never a joke band, the Bags always had a tongue-in-cheek, Spinal Tap-informed sensibility - an undertone of "Yeah, we know this is ridiculous, but isn't it cool?"

In 2003 The Bags reformed and began writing and rehearsing songs. Their "debut" performance at the Middle East in February of 2004 sold out quickly and was a huge success. The following June they released a live 2 song CD on their new Oaf Records label and returned to the Middle East Downstairs for another sold out show. The band spent the summer and fall recording Sharpen Your Sticks, their first full-length album in 13 years. Sharpen Your Sticks delivers 15 tracks of meaty punk/hard rock guaranteed to leave a pleasant ringing sensation in both ears.

The song "Cavemen Rejoice" is featured in the Playstation2 game Guitar Hero.

Night of the Corn People