The Art Of Fact 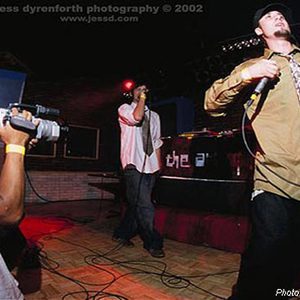 The Art of Fact is anti-hip hop hip-hop. We are independent from the modern image that disguises poor songwriting and ultimately diverts the listener from the words. We are the exact opposite from the traditional appearance and attitude of today's rappers, and our lyrics are meaningful, timeless, and, most importantly, real. We aren't ballers or hustlers or pimps or gangstas or killers, and we don't intend to pretend that we are. We're just ordinary people who simply find hip-hop as a perfectly evolved metronome for sophisticated, percussive rhyme patterns.

And what comes through from our music, that differs from the majority of hip-hop, is the clarity of our truthful direction. So states the name: The Art of Fact (the abstract physical expression of real things).
As a group, we have chosen to make music that can be respected by all musicians, writers, and mainstream media alike, and that gives no bearing on one particular target audience. By doing this, we can be free from restriction and heard by all walks of life. And as far as quality vs. content is concerned, the strength of both in our music is refreshing. Not only is it refreshing to us, but also to listeners that have been tortured by the never-ending battle of popular producers and artists who fail to balance the equation. This has been the goal since the beginning, spending hours and hours re-recording, with hardly enough equipment to play a break beat and record vocals on, but still producing a product we were proud of. Even when times are tough our ambition has always seen us through the struggle.

Ever since we moved to Long Beach from northern California (About 3 years ago) and met our DJ (who lives in Newport) we have accomplished many goals. The completion of two full-length albums (?Act one?, and ?Scene two?) has provided us with an exceptional amount of material to show for. And the next album, which should be out in the late summer (no title yet), will be another chapter all together. We've gotten the opportunity to play many shows with big names at large venues and rock crowds that have never heard of us before, which is, by far, better than sex. And we've also been making beats for skate videos, ads, and Fox Sports for a while now, helping us reach people that wouldn't necessarily go to a show, or look for us on
the internet. Our plan is basically to spread like a virus?a good virus.
We would like nothing more than to change everybody's idea of what hip-ho is. It's not all phony businessmen trying to bully their way into your heart. Hip-hop is music, just like any other genre. And we owe it to all the narrow-minded people that think otherwise.