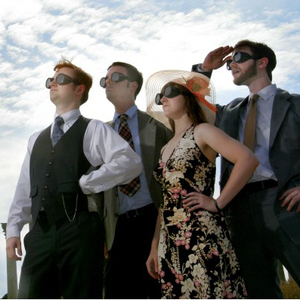 "I Am Magically Happening!", the first full-length from Washington, DC's post-punk quartet The Alphabetical Order shows a great deal of DC indie influence, with hints of Fugazi and Jawbox skating across the soundscape. The album is raw and the songwriting employs ambitious tactics?odd time signatures, unexpected key changes, and non-traditional structure are littered across the 10 tracks. Still, the Order's love of hooks cannot be muted?"Submarines" boasts a sing-along chorus with brilliant harmonies and the anthemic "Shot From Cannons" gets heads nodding with its thundering cadence.

Beyond the music, however, "I Am Magically Happening!" is a treatise on the nature and formation of identity and how the definition of self is distorted in a relationship. In support of the album, The Alphabetical Order has journeyed up and down the east coast, earning praise regionally and nationally.

"Were 'I Am Magically Happening!' recorded by J. Robbins, Ted Nicely, or Ian McKaye with Don Zientara at Inner Ear and released on Dischord, it would be instantly hailed as a great post-punk indie rock burner.... It's got urgent, tightwound post-punk guitars, ultra-rhythmic, propulsive bass and drums, Gavin Dunaway's forceful, highly enunciated vocals, and tunes. Not surprisingly, this reviewer digs it, and hopes that its lack of affiliation with the above won't prevent it from wider recognition."?Jack Rabid, The Big Takeover

"'I Am Magically Happening!' is full of twists, turns, and F-1 chicanes as not-too-common time signatures find themselves employed with massively entertaining choruses and memorable hooks. Impressive guitar solos are the secret weapon behind an infantry of lock-step beats. A little less feedback than typical post-punk, a little more color and flavor than typical post-hardcore, The Alphabetical Order have given us a clever debut LP which is fantastically catchy, awesomely rocking, and rarely misses a step."?Barrett King, Any Given Tuesday

"['I Am Magically Happening!'] is like a post punk / college rock explosion full of songs that take a while to get used to listening. The melodies jump around and it's impossible to casually listen to their songs. The Alphabetical Order demands your attention and they assault your ears to get it."?Grog Mutant, The Chickenfish Speaks

"I Am Magically Happening!" ranked in top 10 DC albums of 2007 by OnTap Magazine

"Submarines" awarded Track of the Day at Garageband.com, July 7, 2007

I Am Magically Happening!