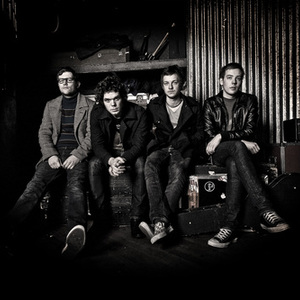 For three simple words ?I', ?love' and ?you' have a clever way of hiding themselves, no more so than in The Alexandria Quartet's debut album. Based in Bergen, Norway's main student city and the country's unofficial pop epicentre, the Quartet have been holed up in studios and rehearsal rooms for the last 18 months polishing a collection of beautiful songs bursting with love, loss and the kind of melodies that come along once in a blue moon.

?Montauk', inspired by the place in New York and its starring role as the place where love blooms in Eternal Sunshine Of The Spotless Mind, is a great introduction to the band's songbook. ?I find it interesting to write love songs,? says singer and songwriter Martin Sk?lnes, ?but when you're writing a love song you can't simply say ?I love you'. I just say ?let me take you to Montauk, is that where we're meant to be'.?

Born in Kopervik, a small city on the west of Norway most well known for, as Martin puts it, ?its drunks and its Christians?, Martin soon found out how to set his own agenda and while his friends were at church his parents would be playing him music - he states without hesitation that the first song he heard was The Searchers' ?Needles & Pins', though REM would usually be on the car stereo and it wasn't long before he fell in love with Oasis. By six he was working out his first chords on the guitar and by seven he was playing the piano; his first song, ?Maybe', was written when he was 11.

?It started with a dream and a desire to get out there and show people I was something,? Martin remembers, ?but after a while I started to realise it was more about expressing who I already was.? This idea of expression is a key ingredient of The Alexandria Quartet's appeal. Now 21, Martin can seem shy and unassuming; he seems to live his life through his lyrics, and somewhere in the heart of The Alexandria Quarter's band's album is the voice of an 11-year-old unbothered by life, blended with his more hardened and world-weary older self as he looks off into the future. It's a captivating mix of innocence, experience and unease at what's happened, what's happening and what's still to come.

The band's story when Martin's friend ?ystein ? The Alexandria Quartet's future guitarist ? moved to Trondheim and met Kim, a drummer, on the gig circuit. When Martin called from Bergen one day to tell his friend about a label who were interested in his music ?ystein and Kim were on the next train. Last to join was bassist Chris Holm, and ?Into The Light' - the first song the band wrote together and one which captures brilliantly Martin's anxiety about moving to Bergen - became a key song for the band. ?I was in a completely new environment,? Martin remembers, ?and the lyrics are about a relationship whose communication problems are spelling the end?. These little snapshots are what bring The Alexandria Quartet's songs to life: it's like the collage effect in the booklet to the original release of the band's debut album, whose sleevenotes were a cut-n-paste scrapbook of the band's first year together.

Another of the band's key songs, ?Somewhere', is a moody affair which offers the merest glimmer of hope. ?There needs to be hope in music,? Martin explains. ?The lyrics in ?Somewhere' are relentlessly negative but we've added positivity in the music itself.? So while the lyrics suggest that the world is going under, a hopeless lost cause, the music adds the idea that things might just turn a corner. It's the scrapbook idea, again: something from here, something from there, something from the back of your head, and the band's sound has been subject to a similar mix of influences. While some bands find who they are in the studio, others define themselves in front of an audience ? but The Alexandria Quartet take a bit of both. ?We develop a sound in the studio and find an energy on stage, then try and feed back that energy when we're back in the studio,? Martin says. Blending the sounds together has pushed the band in a brand new direction, developing a sound which continues to blossom as they work on tracks for their first international release.