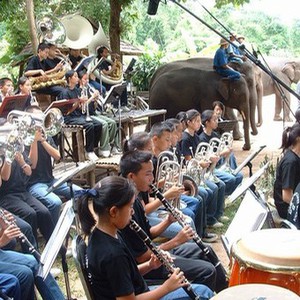 The Thai Elephant Orchestra is a musical ensemble founded by composer Dave Soldier that consists of as many as a sixteen elephants near Lampang in Northern Thailand who play music (essentially conducted improvisations) on enormous specially designed musical instruments. The orchestra was created and is conducted by elephant conservationist Richard Lair of the Thai Elephant Conservation Center with American composer/performer Dave Soldier.

They have two CDs released on the Mulatta Records label and a third is in the works. A nice video can be seen at http://davesoldier.com/thaiorch.html