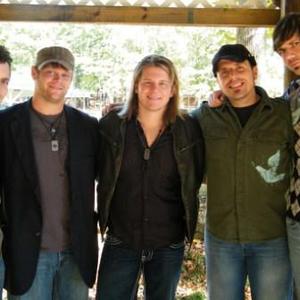 Telluride The band consists of five members: Adam Craig (lead vocals / guitar), Cain Hall (singer / guitar), Jimi Hendrix (yes, that's his name) on bass and vocals, Ryan Jones (singer / guitar / keyboards) and Brian Smith on percussion. With a new-found buzz on their music and magazine spreads as far as the eye can see, something tells me we will all being hearing more about this group in the near future.

TelluRide's music is a special blend of country music that has the chance to appeal to many different types of fans. You have some rock elements, pop country elements, and far more in-between. This is a solid effort from the guys and they should be around for a while. The talent is there and now it's up to the country music audience.