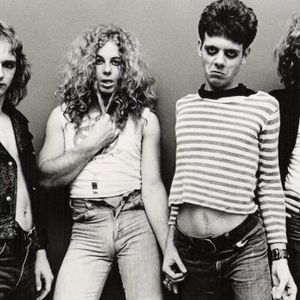 Teenage Head is a Canadian rock group from Hamilton, Ontario and was one of the most popular Canadian new wave/punk rock bands during the early 1980s. They were sometimes referred to as the "Canadian Ramones", despite the fact that their sound was closer to rockabilly than to some of the Ramones' 60s pop influences. Nevertheless, they shared with the Ramones a love of goofy lyrics and a ferocious live show. Although the band is still recording and touring as a unit, they have never succeeded in recapturing their early audience.

Originally from Hamilton, Ontario, the group consisted of Frankie Venom (real name Frank Kerr), Gord Lewis, Steve Mahon (though he later changed his last name to Marshall) and Nick Stipanitz, and took their name from an album and song by The Flamin' Groovies.

Teenage Head came together in the early 70's when four young guys from Westdale High School in Hamilton, Ontario decided to form a band. Gord Lewis, founder and leader, Frank Kerr, Steve Mahon, and Nick Stipanitz weren't buddies, but each had a strong interest in the same type of music. By May 1978, they released their first single "Picture My Face" on Epic Records, and quickly became part of the scene exploding in Toronto. The legendary self-titled debut album followed a year later, turning the heads of many because it perfectly captured the spirit of the era. What's more, it showcased the band's talent as writers, with the ability to craft songs that would continue to stand the test of time, even by today's standards.

Trouble In The Jungle