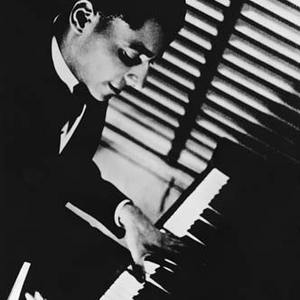 Theodore Shaw "Teddy" Wilson (born 1912-11-24 in Austin, Texas-died 1986-07-31 in New Britain, Connecticut) was a jazz pianist from the United States . His sophisticated and elegant style graced the records of many of the biggest names in jazz, including Louis Armstrong, Benny Goodman, Billie Holiday and Ella Fitzgerald. Wilson studied piano and violin at Tuskegee Institute. After working in the Speed Webb and Louis Armstrong bands, he joined Benny Carter's Chocolate Dandies in 1933.

Wilson studied piano and violin at Tuskegee Institute. After working in the Speed Webb and Louis Armstrong bands, he joined Benny Carter's Chocolate Dandies in 1933. In 1935 he joined the Benny Goodman Trio (which consisted of Goodman, Wilson and drummer Gene Krupa, later expanded to the Benny Goodman Quartet with the addition of Lionel Hampton). The trio performed during the big band's intermissions. By joining the Trio, Wilson became the first black musician to perform in public with a previously all-white jazz group.

In the 1930s and 1940s he recorded fifty hit records with various singers such as Lena Horne and Helen Ward, including many of Billie Holiday's most successful records. During these years he also recorded many highly regarded sessions with a wide range of important swing musicians, such as Lester Young, Roy Eldridge, Charlie Shavers, Red Norvo, Buck Clayton and Ben Webster.

Wilson formed his own short-lived big band in 1939, then led a sextet at Cafe Society from 1940 to 1944. In the 1950s he taught at the Juilliard School. Wilson performed as a soloist and with pick-up groups up until the final years of his life.