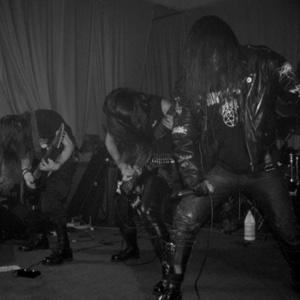 There are two vastly different current artists using the name Antaeus, and (apparently) two past ones. (1) A French black metal band with albums Cut Your Flesh And Worship Satan, De Principii Evangelikum, and Blood Libels; notable track Gates to the Outside. (more below) (2) A chill/electronica/club music artist (aka Alexx Antaeus) with albums Byzantine Meditation, World Prayer, and Zero4; notable track Palm of the prophet. (more below)

(1) A French black metal band with albums Cut Your Flesh And Worship Satan, De Principii Evangelikum, and Blood Libels; notable track Gates to the Outside. (more below)

(2) A chill/electronica/club music artist (aka Alexx Antaeus) with albums Byzantine Meditation, World Prayer, and Zero4; notable track Palm of the prophet. (more below)

About Blood Libels, Todd DePalma of StylusMagazine.com said, "Melody is tempered through vivid motion, recycling a violent conquering of style. Upstrokes rake hopeless feeling across incessant blast-beaten rhythm, falling like copper shavings into an open sore.... Structure betrays a craft in tune with the adamantine will. The mordant efflorescence is reset through ambient refrains, suspiring in the aftermath or else opening like a valve between them as toxic pools reflect a fetid attraction to misery and imprisonment of the body?a spiritual negative condensed in the title track's provocation to prove we're 'more than flesh.'" Jeremy Garner of MetalReview.com notes that "the attenuation of mood is absolutely flawless. 'Words as Weapons', 'Here is Punishment', and 'Blood Libels' all act as damn impressive moments flesh tearing guitar lines and pernicious vocals enveloping the listener in a fog of aural torture and despair by creating interesting juxtapositions between atmosphere and the no quarter attitude of songs like 'Cyklik Torture'. When it comes down to it though, there are very few other bands that have such good taste as musicians to not let their music become repetitive or annoyingly overdone."

According to a recent interview with MkM, Antaeus will never play live again. They remain active as a recording band with the "incomplete" line-up and probably some session musicians in the future.

Byzantine Meditation is a chillout soundscape fusing voices, traditional instruments, electronica, hip-hop, and drum 'n' bass. The title track Byzantine Meditation received significant airplay on Smooth Jazz and eclectic stations and was used in Jacob's Coffee TV commercials. For World Prayer, the Virgin Megastore magazine raved: "Few Greeks up to now have been able to make their presence felt in the international music world. One of them is Antaeus...Sources of inspiration this time are religions from around the world, always with the enchanting atmosphere that Antaeus creates..." Zero4 is his latest release. In it, he blends urban and club beats with ethnic melodies and ambient sensitivity. Palm of the prophet, one of the album's tracks, has been included in the Buddha Bar VIII compilation. Several songs from the album are receiving airplay on chill, Smooth Jazz, and eclectic stations around the world. In his review of Zero4 at enigmaonline.com, Thomas Martin wrote: "Production is at its...best," and "I'll recommend Antaeus to anyone who owns Paul Simon's Graceland and Air's Virgin Suicide / Talkie Walkie." Professor Marshall J. Cook, Editor of Creativity Connection at the University of Wisconsin-Madison, said, "(Antaeus' music) seems at once unique and familiar to me, and I don't seem to tire of it after several playings."

Alexx Antaeus has been active in the music industry since 1986: he has remixed/produced for Young M.C., Falco, Lonnie Gordon, Malcolm McLaren, Nusrat Fateh Ali Khan, The Rolling Stones, The Boys, Herbert Gronemeyer, and Earth, Wind & Fire. Some of the club music projects he has launched are Jeek! and AAR. For his work, he has earned several gold and platinum plaques.
Similar artist: Enigma.
Website: http://monomrecords.com/artists/antaeus/
http://www.antaeusmusic.com/
Myspace/antaeusmusic

Other artists who have used the name Antaeus include:

An alternative rock band from Smithtown, USA, who established a freespace website and a facebook page in 1995 and used them for maybe a month. They list members: Tyler Liers (lead guitar/vocals), Brian Kassay (rhythm guitar/lead vocals), Julie Tarry (drums), and Hannah Havemann (bass); and influences: Weezer, The Beatles. www.freewebs.com/antaeusrock & Myspace.com/Antaeus (apparently they got to Myspace first).

Early versions of this wiki mentioned another band named Antaeus, hardcore/metal, based in Oklahoma, and cited their myspace page Myspace/antaeushardcore.

Antaeus is also a Greek mythological figure, the giant son of Poseidon and Gaia.