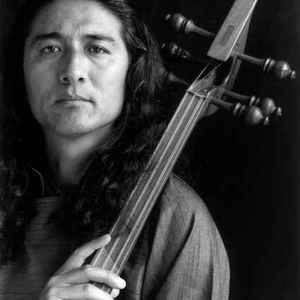 Techung is a prominent Tibetan singer/songwriter living in exile in the San Francisco Bay Area. He is best known for his performances of traditional Tibetan music, dance, and opera under the name Tashi Dhondup Sharzur. He uses his childhood nickname, Techung, when performing as a solo artist. Whether performing in traditional or contemporary styles, Techung's dual goals are to revive Tibetan music in the Tibetan community and to expose the rich performing cultural tradition of his homeland to the world community.

Techung grew up in Dharamsala, India, rather than in his native Tibet, because in 1949 Communist China brutally occupied his homeland. He and his family were forced to resettle in India along with tens of thousands of other Tibetans. Because of the limited educational opportunities open to young refugees in the 1970s, he was enrolled at age 9 in the newly formed Tibetan Institute of Performing Arts (TIPA), although his family did not have an artistic background. In his 19 years of residency at the Institute, he studied all aspects of the Tibetan performing arts - folk, court, and religious music traditions - through the oral teaching tradition used by the venerated Tibetan elders with whom he was honored to study. He toured with TIPA in its first international tour as a leading child actor in 1975-76 and for many years afterwards. After emigrating to the U.S., he co-founded the San Francisco-based Chaksampa Tibetan Dance and Opera Company in 1989.

Under Tashi Dhondup's leadership as Artistic Director, Chaksampa has performed all over the world, often by invitation at prestigious venues such as the Smithsonian Folklife Festival in Washington, DC and the Asian Art Museum in San Francisco. The group has performed in all four of the Tibetan Freedom Concerts organized by the Milarepa Fund, appearing with such artists as John Lee Hooker, Taj Mahal, Buddy Guy, Pearl Jam, Herbie Hancock, Tracy Chapman, the Beastie Boys, U2, and others. Techung's relationship with the Milarepa Fund included a position as Education Coodinator and Tibetan Community Liaison. One of Chaksampa's songs is included in the CD "Tibetan Freedom Concert" produced by Grand Royal and Capitol Records. Chaksampa made its debut at Carnegie Hall with Philip Glass, REM, Trey Anastasio, Seon Colvin, and Patti Smith as part of New York Tibet House's annual Monlam festival concert.

In addition to being looked up to as one of the key keepers of traditional Tibetan musical traditions, Techung is also respected for the original solo and collaborative music he creates by drawing on both his own heritage and his familiarity with other world music traditions. He collaborated on his first solo album, "Yarlung: Tibetan Songs of Love and Freedom" (1997) with composer/performer Miguel Frasconi, followed by "Sky Treasure" (2001) with Windham Hill jazz keyboardist Kit Walker. His other two solo albums were "Chang Shae: Traditional Tibetan drinking songs, Vol. 1" (1999) and "Nyingtop-Courage" (2002). His song "Losar" was chosen as the 2003 best modern traditional Tibetan song at the first annual Tibetan Music Awards held in Dharamsala.

Techung's voice and music have been featured on the soundtracks of the IMAX film "Everest," the feature film "Windhorse," the documentary films "Stranger in My Native Land," "Tibet's Stolen Child," and "Three Days for Tibet" (about a concert in Dharamsala with Joan Osborne, Zakir Hussein and other musicians). His music was also featured on PSA's for the Milarepa Fund (promoting the 1999 Tibetan Freedom Concert), Students' For a Free Tibet's DVD demo "Tibet Will Be Free", and Amnesty International (soliciting support for the human rights case of Ven. Palden Gyatso), as well as on an audio book by Diki Tsering titled "Dalai Lama, My Son." His music is currently being used in documentary film "What Remains of Us" which was selected at 2004 CANNES film festival. His music will be used in the upcoming Tibetan feature film Dreaming of Lhasa (working title: Poison Charm) directed by Tenzing Sonam and Ritu Sarin.