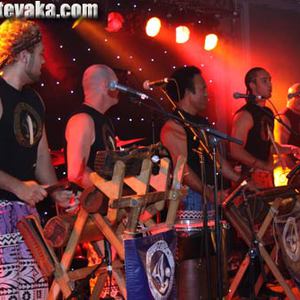 Te Vaka is a unique group of ten musicians and dancers from Tokelau, Tuvalu, Samoa, Cook Islands, and New Zealand brought together under the inspired leadership of Opetaia Foa'i. They have been wowing international audiences since 1997, presenting a rich, luscious mix of Polynesia's ancient culture, to the modern world and in 2008 won the ?Best Pacific Group? award. The language they sing in is usually Tokelau but more recently they have been singing in Samoan and Tuvaluan too.

The language they sing in is usually Tokelau but more recently they have been singing in Samoan and Tuvaluan too.

Te Vaka has performed in the USA and toured the UK, Europe & other parts of the world extensively over the last 12 years, performing in such prestigious venues as London's Royal Festival Hall and Ronnie Scott's nightclub. The group has headlined music festivals throughout Europe and been favourites at WOMAD festivals around the world including the WOMAD Festival in Seattle, USA. They have been nominated for two BBC Radio 3, World Music Awards - Best ?Asia Pacific? and the ?Audience Choice Award? categories.

Opetaia Foa'i is the songwriter/ lead vocalist of the group. The inspiration for his music comes from his multi-cultural upbringing - half Tokelauan, half Tuvaluan, born in Samoa and bought up in a Tokelauan community in New Zealand. Opetaia's musical background spans both the traditional and the diverse influences of contemporary metropolitan culture.
Described as ?one of New Zealand's finest songwriters? and ? a true son of the Pacific?, he won the Senior Pacific Artist award in 2005 for his contribution to the Pacific Arts.

Te Vaka has performed in more than 35 countries around the world and released five albums to date. The first gained immediate worldwide acclaim and recognition for the group. Released through ARC Music, a UK based Record company, the album was distributed to over 80 countries. The second album, released in 1999 through Warm Earth Records created an even bigger impact going to number one on world music charts and in some countries on mainstream radio. The third album, released in May 2002, was described as ?Phenomenal? and gained the group a nomination in ?Best Roots? category in the New Zealand music awards. The 4th album Tutuki , entered the European World Music Charts at no. 4 & the USA Global Rhythm top 10 chart at no. 3. It won a Tui for ?Best Pacific Music Album? in the New Zealand music awards. The latest Te Vaka album Olatia, released in July 2007 has also achieved rave reviews both in New Zealand and internationally, entering the European World Music Chart at No. 4 and winning a