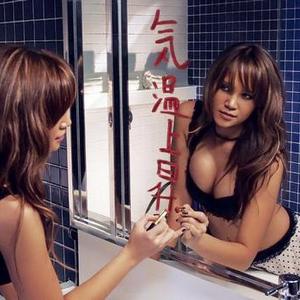 Amita Marie Young (born Su Min Ta Marie Young, Thai: ????? ???? ??? Amita Marie Yang, December 14, 1980 in Bangkok, Thailand), better known under her stage name Tata Young, is a Thai singer, model actress and dancer. Young is the only daughter of an American father and a Thai mother. In a childhood filled with singing and dancing, Tata had already shown early signs of a talent that would take her from being Thailand's biggest teenage pop sensation to an international recording artist.

Young is the only daughter of an American father and a Thai mother. In a childhood filled with singing and dancing, Tata had already shown early signs of a talent that would take her from being Thailand's biggest teenage pop sensation to an international recording artist. At the tender age of 11, Tata beat 5,300 other young children to be crowned winner of the International Division of the nationwide Thailand Junior Singing Contest by belting her rendition of ?One Night Only?.

The victory earned her an entertainer's contract with Yamaha Music in preparation for her impending debut in show business. In 1994, the 14-year-old caught the eye of A&R executives from Grammy Entertainment, Thailand's biggest entertainment conglomerate, snapping her up with a recording artist contract.

Within a short year, Tata had recorded and released her debut Thai-language album ?Amita Tata Young? which shot to the top of the charts and sold more than a million copies in less than five months. Almost overnight ? and at the tender age of 15 - Tata became the biggest pop sensation in Thailand.

Her reputation was solidified when sales of her follow-up album ?TATA 1,000,000 Copies Celebration?, that included the hit single ?Chan Rak Thur? (I Love You), hit the 1 million sales mark as well.

1995 saw the teen star collect a string of top awards and accolades, included being named Entertainer of the Year by the B Bangkok Press, as well as B est Recording Artist for 1995, an award for Music Video of the Year, awards for Number One and Two Singles of the Year, and Album of the Year for ?Amita Tata Young?, at the Radio Vote Awards in Thailand.

She was chosen to represent Thailand for the Australian Television program "World Telly Broadcast", which also featured Youth in Asia and was broadcast in February of 1996. The program was seen by audiences in Australia and throughout Southeast Asia.

In April 1996, Tata held her ?Tata Live in Hollywood Concert? at the renowned Hollywood Palladium. It was a rare event for an Asian singer to be performing in front of an American audience. Nevertheless, the concert received outstanding reviews.

Tata was selected by the Chinese Government to represent Thailand at the Hand-over Concert for the Hong Kong Hand-over Ceremonies held on July 5th, 1997 alongside international acts such as Wet Wet Wet, Michael Learns to Rock, Lisa Stansfield, All 4 One, and the B rand New Heavies.

That same year, Tata became the first entertainer in 14 years to receive the coveted Golden Pikkanes God Award presented by the Musical Artist Association of Thailand under the patronage of His Majesty the King of Thailand .

Tata's talents aren't limited to just singing and performing live on stage. Trendy, beautiful and vivacious, she has also developed a highly-successful modeling and acting career.

Tata made her film debut in 1997 in the youth drama ?The Red Bike Story? which broke the all-time attendance record upon its release for any movie in the history of Thailand. Her stunning debut earned her the Best Female Actress Award (Thailand) presented at the 4 th Annual Blockbuster Entertainment Awards 1997. She followed that up with two other celluloid hits, ?O-Negative? and ?Plai Tien?.

In 1997, Elle Magazine named her one of Thailand's ?10 Most Influential People?.Tata was also chosen to sing ?Reach for the Stars? in the opening ceremony for the 13 th Asian Games in Bangkok in 1998.

In 1998, Asiaweek selected Tata as "One of 25 Most Influential Trend-setters in Asia?.

In 2001, she launched a self-titled album under her new record company Tero Records. The album was an instant hit. Almost all of the album's songs, including Shot, A-bo-da-be, Tua Saeb, Wan Jai, Keb Chan Wai Yuen Khang Thoe Tham Mai climbed to the top of the music charts.

In the same year, Tata featured on the cover of Time Magazine in their study of successful Eurasians in Asia.

2002 saw Tata release her second album with Tero Records called ?Real TT?. The star co-produced the album, co-wrote the songs and laid out the concepts. Hits from this album include Super Fan and Yak Keb Thoe Wai Thang Song Khon.

2004 is considered one of the most important years for Tata Young as she released her English-language debut album ?I Believe? under Columbia Records. The album was officially launched on February 14 th in Singapore. Over 100 reporters from around the world attended her press conference.

Tata Young is Thailand's superstar. She is the first Thai female artist to launch an international album and has gained unprecedented success all across Asia. There is no Asian country that is not familiar with her name.

In Singapore, she performed and was chosen to join the judging panel at the Miss Singapore 2004 pageant. A well-known sitcom there released a special episode featuring Tata as a special guest.

Although the artist had to change the name of her song ?Sexy, Naughty, Bitchy? to ?Sexy, Naughty, Cheeky? in Malaysia, she was still going strong. Tata was voted as one of the 50 sexiest women in the world by the Malaysian publications.

In India, Tata Young became the first female artist to appear on the front page of 2 newspapers simultaneously. She was also invited to sing the soundtrack for the most costly movie ever made in Bollywood.

In Korea, Tata invited No.1 male Korean artist ?H? to sing a duet with her in the hit single ?I Think of You?. The song was Tata's 4th single from ?I Believe?.

In Taiwan, Tata became the first Thai artist to be invited to perform at the Golden Melody Awards,or Taiwan's equivalent of the Grammy Awards. Tata has also worked with F4, Jay Chou, Wang Lee Hom, Jolin Tsai and many other artists.

In Hong Kong and China, ?Sexy, Naughty, B itchy? and ?I Believe? climbed to the top of the charts.

In Japan, Following her rapid successes in Southeast Asia, Tata Young turned her attention to Japan, a nation with a difficult music industry to crack. Tata's hit single ?Sexy, Naughty, B itchy?, however, was played on every radio station and climbed to the top of the Zip FM charts and made it to the top ten of the Oregon Charts, one of the most highly-regarded music charts in Japan. Her music video was played every ten minutes on the big screens in Shibuya, a popular teenage hang-out in Japan. Her album reached platinum in sale at 300,000 copies, an astonishing record for an international album in Japan. Her 6 sold-out concerts in Fukuoka, Osaka, Yokohama, Nagoya, Sendai and Tokyo were huge successes; receiving warm praises from Japanese fans. The Japanese media proclaimed her performance as the hottest concert ever.
Tata was awarded Best International Artist of the Year by the Recording Industry Association Japan (RIAJ).

Tata's ?I believe album' has sold over 1.2 millions copies regionally, and the Tata Young Dhoom Tour in Thailand sold out 27,000 seats in a matter of 4 hours where Tata's Thai Fans got to hear all of Tata's hits.

The Thai superstar formed the Tata Young Fan Club in 1997 under the auspices of her company TATA Entertainment to gather support from her fans to provide assistance to ?The Human Development Foundation?, a charitable organization that aids underprivileged children in Thailand.

Tata fans will soon get to hear her newest English album, which she's currently recording in the USA, Canada and England and CD slated for release August 2006.

The Love Of Tata Young