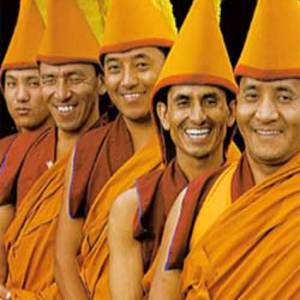 Tashi Lhunpo Monastery is seat to the Panchen Lama, the second most important spiritual leader of Tibet. In 1447 the Monastery was founded by His Holiness the 1st Dalai Lama, Gyalwa Gendun Drup, in Shigatse, Tibet's second largest city. It is one of the four great monasteries of Central Tibet and was supervised and looked after by the Dalai Lamas and Panchen Lamas of the Gelugpa, or Yellow Hat tradition. It has the glory of producing thousands of renowned scholars in the field of Mahayana Buddhist Philosophy and Tantra.

During the lifetime of the 4th Panchen Lama, Lobsang Choekyi Gyaltsen, there were more than 3,000 monks in the Monastery and by 1959 there were 5,000, with another 2,000 monks affiliated to the monastery living outside Tibet. The Communist Chinese invasion of Tibet in 1959 and the Cultural Revolution from 1966-80 both wreaked destruction on Tibet's monastic institutions, which lost many precious scriptures, statues and images. Many monks were killed or imprisoned and only 250 were able to follow the Dalai Lama into exile.

In 1972, under the patronage of His Holiness the 14th Dalai Lama, Tashi Lhunpo Monastery was re-established in the Southern Indian state of Karnataka. The monastery has monks coming from Tibet and the Himalayan regions of Spithi, Khunu, Ladakh and Arunachal. Occupying a central position in the Tibetan settlement of Bylakuppe, there are over 300 monks including many Tulkus (reincarnate lamas) studying and performing various religious practices.

Sacred Prayers for H.H. the Dalai Lamas and Panchen Lamas