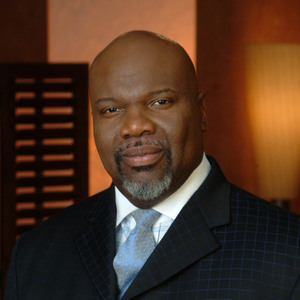 Thomas Dexter "T. D." Jakes Sr. (born June 9, 1957) is an American entrepreneur and chief pastor of the The Potter's House, a 30,000 member church in Dallas, Texas.[1] It is a non-denominational megachurch. His church services and evangelistic sermons are broadcast on The Potter's Touch, which airs on the Trinity Broadcasting Network, Black Entertainment Television[2] and The Word Network. Other aspects of Jakes' ministry include an annual revival called "MegaFest" (which draws more than 100,000 people during that period of time)...

His church services and evangelistic sermons are broadcast on The Potter's Touch, which airs on the Trinity Broadcasting Network, Black Entertainment Television[2] and The Word Network. Other aspects of Jakes' ministry include an annual revival called "MegaFest" (which draws more than 100,000 people during that period of time), an annual women's conference called "Woman Thou Art Loosed", and gospel music recordings. He is also connected to Mt. Gilead Full Gospel International Ministries in Richmond, Virginia.

In the fall of 2009, Jakes plan on launching a secular daily talk show, syndicated through the CBS Television Distribution group; however, economic troubles in the industry may put his new program into jeopardy. [3]

Thomas Dexter June 9, 1957 in South Charleston, West Virginia to Ernest Jakes, Sr., a janitor and entrepreneur[2] , and Odith, an educator. Even as a child he was known in his West Virginian neighborhood as "the Bad Bible boy." He was also told he would never be able to preach because of his "bad" lisp. [4] Shortly after his father's death from kidney failure, Jakes decided to go into ministry. [2] In 1979, with very little funds of his own and with only ten initial members, he founded Greater Emmanuel Temple of Faith as a storefront church in Montgomery, West Virginia. Jakes maintained his day job digging ditches in order to support his ministry until the church was able to support him. During its first 10 years, the church grew to over 1,000 members. [5] In 1982, Jakes turned to full-time ministry.[2]

By 1990, his church had moved twice, first from Montgomery to the nearby community of Smithers, and from there to his hometown of South Charleston. In 1993, the church moved yet again within the Charleston area, to Cross Lanes.[6]

In 1995, when he was 38 years old, Jakes started his television ministry. [4] In 1996 Jakes founded The Potter's House in Dallas, Texas, with about 50 families that had relocated with him from his former congregation in Cross Lanes. Jakes purchased the property, which was previously Eagle's Nest Family Church, from WV Grant after Grant was sentenced to 16 months in prison for tax-related crimes.[7] In its 12-year existence it has grown to over 30,000 members.[citation needed] Both Jakes and his Potter's House church are unrelated to the Potter's House Christian Fellowship, a Pentecostal denomination founded in Arizona in 1970.
[edit]Family and Heritage

In 1981 he married Serita Ann Jamison.[2] They have five children together (Jamar, Jermaine, Cora, Sarah, and Thomas Jakes Jr.) Jakes is a strong advocate of abstinence and has made appearances on the subject ranging from Good Morning America to Dr. Phil. Jermaine Jakes is a step-son of Jakes, and was arrested in January 2009 for indecent exposure in a public park to undercover police officers.

Critics have accused him of promoting views on God that derive from Oneness Pentecostalism, but he has denied this.[12]
Jakes subscribes to "prosperity theology," which in essence teaches that God rewards his faithful followers by overt material means.[citation needed] As such, Jakes is unapologetic in amassing expensive clothes, luxury cars, and property. His detractors, however, argue that the Jesus of the Bible did not practice such an indulgence in material wealth, and as such, Jakes is teaching a contra-Biblical message.
Jakes has also been criticized for not speaking on racism by Cain Hope Felder, dean of the Howard University Divinity School, and others.[2]
Awards and Accomplishments

Jakes has received numerous honors, including 13 honorary degrees and doctorates. He has also received Grammy and Dove Award nominations for Gospel album "Live at The Potter's House." PBS Religion and Ethics Newsweekly named Jakes among America's "Top 10 Religious Leaders." Time magazine featured Jake on the cover of its September 17, 2001 issue with the provocative question: "Is This Man the Next Billy Graham?". [5]
Shayne Lee, a sociologist at Tulane University, wrote the first biography of Jakes entitled T.D. Jakes: America's New Preacher, in which he portrays the bishop as a complicated preacher brimming with paradoxes and contradictions and motivated by the dual task of healing hearts and generating market share. Lee compares Jakes to Jay Gatsby and calls him a model of the new postmodern evangelical preacher. Jakes is one of five evangelicals featured in Dr. Lee's new book Holy Mavericks: Evangelical Innovators and the Spiritual Marketplace, co-authored by historian Phillip Sinitiere and published by NYU Press.
[edit]Christian Ministry

Jakes is a charismatic speaker and preacher whose sermons are broadcast nationally and internationally over television and satellite television. Jakes is also a prolific author and has written over 30 books, many of which have been featured on the New York Times best-selling list. Jakes is also a songwriter, a playwright, and performer. He founded a Christian record label (Dexterity Sounds [13]) as well as a theater and movie production company.[14]

Jakes' church, The Potter's House, is very active in ministry and outreach both locally and internationally. The Potter's House sends drugs and alcohol counselling to the inner city, volunteers to the elderly, to prostitutes and victims of domestic abuse. [4] Jakes also has a special interest in the continent of Africa, and The Potter's House launched an initiative that brought water wells, medicine, and ministry to thousands of people in and around Nairobi in Kenya.[14]

Intimacy With God
Can You Stand To Be Blessed?
Naked And Not Ashamed?
Loose That Man And Lets Him Go
Loose That Man And Let Him Go Work Book
Positioning Yourself To Prosper
Reposition Yourself: Living a Life Without Limits
He-Motions: Even Strong Men Struggle
Help! I'm Raising My Children Alone: A Guide for Single Ladies and Those Who Sometimes Feel They Are
Ten Commandments of Working in a Hostile Environment
Promises From God For Single Women
Woman, Thou Art Loosed: Healing the Wounds of the Past
The Lady, Her Lover, and Her Lord
Maximize the Moment : God's Action Plan For Your Life
So You Call Yourself a Man?: Finally Devotional for Ordinary Men With Extraordinary Potential
God's Leading Lady
His Lady
Jesus Walks (with me)
Whats up church,!!
Daddy Loves His Girls
The Greatest Investment
Mama Made the Difference
TD Jakes Speaks To Men
Before You Do : Making Great Decisions That That You Won't Regret, Atria Books, 2008. ISBN 978-1416547280
[edit]Movies

Woman Thou Art Loosed (based on Jakes' novel of the same name)[15]
Not Easily Broken (based on another Jakes' novel).[16]
He is Gangstalisous How to be hood without people knowing Reach for the stars
[edit]References

The Storm Is Over