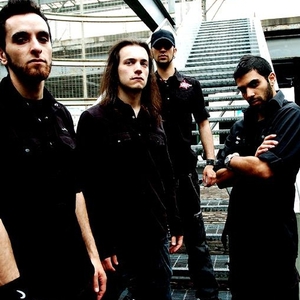 For the past decade the city of Montreal has become a notorious hotbed for producing some of the world's most influential metal acts. For years, bands such as Depised Icon, Gorguts, Ion Dissonance, A Perfect Murder, and Cryptopsy have emerged from Montreal's distinct music scene and provided ground-breaking music to the masses. Synastry is next on a long list of bands that continue to embrace the hardened metal edge while innovating around the genre's solid framework.

Formed in 2005, the quartet has functioned as one of the best examples of death metal emerging as a dominating force in heavy music. While clearly rooted in classic death, Synastry's sound is ferociously accented by an industrial sludge. The result is a hydra headed wall of futuristic thrash. Vocalist Jimmy Anastasopoulos' vicious growl complimenting Pavel Ikonomov's guitar assault while bassist Garen Vartivarian and drummer Kegham Kesserian combine to the form the band's unrelenting rhythm section.

"Our sound is somewhere between brutal and futuristic," says Synastry drummer Kegham Kesserian. "We knew there was more of a soundscope that we could nurture if we used samples and electronics, and the experimentation paid off. We wanted to create something more than just the typical metal sound that we had become so accustomed to, so we wanted to bring something to the ear and the audience that isn't as widespread in death metal."

From touring relentlessly throughout Quebec and the rest of Canada, Synastry soon found increased exposure on web and real radio throughout North America and Europe while also being featured in Canada's heavy metal bible, Brave Words & Bloody Knuckles. A fearless live performance, featuring an unpredictable and vital Anastasopoulos, became a unique staple and kept the band on the road for most of 2007 with them sharing the stage with Blessed By A Broken Heart, Camilla Rhodes, Rotting Christ, The Agonist, Forever in Terror, and 3 Mile Scream to name a few.

The band culminated their national success by signing with Year of the Sun Records in the winter of 2008 with their debut record ?Blind Eyes Bleed? being slated for release the following spring. Produced by Ex-Slaves On Dope guitarist Kevin Jardine, the thirteen track record is a testament to Synastry's brutal delivery and epic scope. Songs such as the crushing ?As The Dust Settles? and ?Betrayed By My Flesh? are clear cut examples of the band's thunderous progressiveness while songs like the melodic ?In Your Eyes? (featuring The Agonist's frontwoman Alissa White Gluz) exemplify the band's aversion to staying inside the box. Even Johan Liiva, the founding vocalist of the legendary Arch Enemy, lends his pipes to the punishing ?Visions of Anger?.

?The collaboration with Johan Liiva came as a surprise, as we happened to run into one another online. After exchanging info and getting to know each other, I asked Johan to sing on ?Visions of Anger' and he accepted. The knowledge and wisdom imparted on us by Johan was a gift that you can't just pick up somewhere other than when a living legend shows you the way,? says Anastasopoulos. ?For 'In Your Eyes', I have known Alissa for a few years now and had always wanted to do this type of collaboration. When I brought up the idea, Alissa seemed as excited as I was. ?In Your Eyes' was one of the most fun moments we had in the studio as we let the creativity flow and were very surprised with the results.?