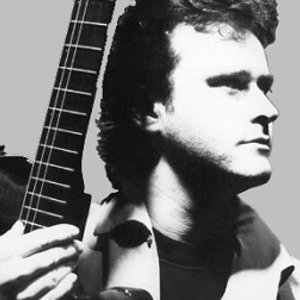 Sylvain Luc comes from Bayonne. Surrounded by the inspiring atmosphere of his eagerly music practising brothers, he chooses the guitar as his instrument at the age of 5. He is 9 when he enters the conservatoire and starts recording his first album of Basque folklore "Elgarrekin" together with his brothers. In the Luc family they remember with tenderness the year when he made his stage debut as Joe Dassin with a local group.

His preference for the strings is not limited to the guitar alone; by exploring the classical richness (with Jorge Cardoso), he learns to appreciate the mandolin, the violin and studies the cello for 10 years. At the age of 12 he joins the group of his brother Gerard, accordionist, and makes his second "family record", "Olinakarin". In the early 80's, when he is 15, he discovers jazz and starts his first group "Bulle Quintet". 1982 he gets an award at the Festival international de San Sebastian.