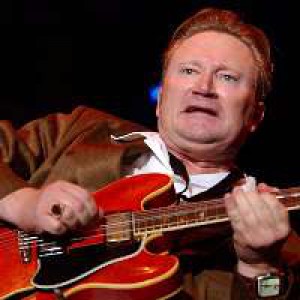 Talking about blues players outside America it?s hard to leave out Sven Zetterberg, Sweden?s most versatile artist in this field.Being both an excellent singer,guitarist,songwriter and harmonicaplayer extraordinary,he has become a house-hold name all over Scandinavia.Born in Sk?rblacka on the 28th of March in 1952,Sven took music seriously enough to perform in school at the age of seven. "I didn?t know any real english words and couldn?t actually play any instrument but my grand-mother had bought me an acoustic guitar that I fooled around with trying to mimic Elvis Presley.

"I didn?t know any real english words and couldn?t actually play any instrument but my grand-mother had bought me an acoustic guitar that I fooled around with trying to mimic Elvis Presley.The first black performer I heard was Little Richard and he almost drove me crazy with his wild,frantic singing."In 1964 he first heard Mick Jagger play harmonica and later that year heard Sonny Boy Williamson(Rice Miller) and that got him started."The Blues activated something inme and it still moves me".

"Harmonica was my main instrument to begin with.I didn?t start playing guitar seriously until I was 24.The first bluesband,Telge Blues,was formed in 1972 and lasted long enough to make the Phillips record company interested enough to release an album in 1976.

Today,many albums later,Sven hasn?t lost interest in performing or recording and two of his albums,"Blues from within" and "Let me get over it" were both nominated for a Grammy in Sweden.Today,unfortunetaly, the rules been changed so that no blues cd whatsoever can compete with other types of music in Sweden.

Today Sven performs with his own 5-piece band or occasionally works as a solo artist with different backing groups.The two last released cd:s "Moving in the right Direction" and "Southern Soul Agenda" + the compilation "Soul of a man" all did get very fine reviews in Swedish magazines.

Sven has never regret that he left his job as a delivery van driver for the Swedish mail company back in 1985 to become a full time musician and is constantly performing and recording. His singing and playing through the years have resulted in an unmistakably original style that is his own."We do a lot of blues "live"but also include deep soul material,originals as well as classic soul gems.

Sven also works occasionally with The Beat from Palookaville and also with:

Every once in a while he?s making performances with his own juke joint sounding unit.Sven Zetterberg Trio :

Hollerin' Up A Storm

Moving In The Right Direction

Let Me Get Over it