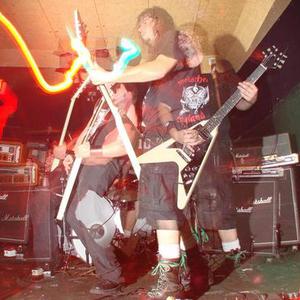 Spread the rock The Milky Way Galaxy, 2074: a craft not unlike a goat skull is coasting in its orbit around the planet once known as Earth. Within each eye-socket window sits two menall four of them excessively weary, their eyes bloodshot; they appear lethargic yet amused. Space madness? We know not; but their arrival from a 70-year interplanetary tour has undoubtedly taken its toll. The craft creeps beyond the range of the human worlds observatory and only with a cyclopean telescope can one read its moniker: SuperHeavyGoatAss.

Go ahead, laugh. Our boys from Austin, Texas have bestowed upon themselves one of the funniest and perfectly appropriate band names, everbut theres a lot more to em. If we were to play intellectual and delve into the significance and etymology of the name SuperHeavyGoatAsssplit it open, peel away its flesh and secure it to the cutting board with steak knives so we may examine the insides, wed understand more about the band and their music (specifically their new album 60,000 Years). Super (..Super.., adv.: to an extreme degree) Heavy (..Heavy.., a.: Loud; deep; -- said of sound; as, heavy thunder) Goat (..Goat.., n.: a ruminant having a beard and straight horns symbolic of evil/Satan) Ass (..Ass.., n.: domestic beast of burden) This band and this album are everything you want in your rock n rolland more: simple, unaffected, loud, cool, a little nasty and a lotta fun. Know this: when SuperHeavyGoatAss throws down, its for real. SuperHeavyGoatAss was formed as a trio in the winter of 1999 with Lubbock natives Abbott, drummer/percussionist Tim Hurt and bassist Brent Boepple. They played as a trio on Austins Red River scene, plying a mixture of ZZ Top stomp-swagger and Sabbath sludge that they released as: Bitches and Barbeque. In 2002, the band pulled in San Angelo guitarist Derek Halfmann in order to add more harmonies, as well as thickness in tone and frequencies. As a quartet they cut 2002s self-released S/T and then a split CD in 2003 with Southern Gun Culture. Over these two releases, the Superheavygoatass sound evolved. Abbott says the band was formed on a foundation of loud and powerful, but a keep em guessing ethos naturally emerged to keep things interesting. Is it southern? Punk? Seventies? Metal? he asks rhetorically. There is no answer, and SuperHeavyGoatAss likes it that way. 60,000 Years, the bands Arclight Records debut, is a heavy-like-six-thousand-decades-of-elapsed-time slab-of-fucking-rock, which SuperHeavyGoatAss spreads thick. From the ominous bass tones of Druglord through the Southern dirge SSOB. There is kind of a sci-fi motif, I guess, says Abbott of the album, which was recorded virtually live at Arclights own Republic Studios and produced and engineered by Arclight partner David Elizondo. Its about timethe past, the future, further joking that it took 60,000 years to record. The nine songs were written over a span of four years; recording took about a year; mixing, a month. It has been a big work in progress, Abbott says, but its worth it. Truly, the album is the Flux Capacitor of all that SuperHeavyGoatAss has to offer; this isnt simply stoner sludge; its rock n roll of every conceivable and palatable flavor, cranked up in fine tradition to the magic number of eleven. Track five, Best Friend has it all: you hear their melodic smarts in the minute-long sitar-esque lulls; you ride the galloping thrash time changes; you feel the full-on fuzz-fest verses and, within them, experience their wicked sardonic humor (Satan is my best friend/he never asks for nothing/I know I wont let him take me to the evil land). Elsewhere, Slave marries AC/DC swagger to Black Sabbaths slow severity as it laments the drudgery of servitude while the endurance anthem, Built to Last kicks out the jams Southern style (think the Allmans meets Thin Lizzy). The epic - even at 4:02, Lastin Kind conjures these bands, plus Clutch, as Abbott growls the sci-fi worldview of a being that passes 60,000 years like its as fleeting as a 25-cent peep show: This world, it aint much of a lastin kind. 60,000 Years may very well prove SuperHeavyGoatAss to be the lastin kind as they tour through 2005 with labelmates Amplified Heat. Ask em to speculate about their own greatness, though, and they keep it simple. In January of 2006 they added Kenny Wagner of Honky,Halfway to Gone, and 60 Watt Shaman on drums so they can start touring alot more. Were gonna be around forever no matter what, promises Abbott, whether its as a little band in a van with no money or a big band in an arena, just cause we love to do this. We really hope people like it, but were not trying to be false prophets, if you will. Were just a bunch of ol West Texas boys who like heavy rock. As an afterthought, he relates a story involving Boepple. We were on tour in Santa Cruz and somebody asked him, What is your band about? What are you trying to do? There should be something youre trying to accomplish. He just said, Were just trying to spread the rock.