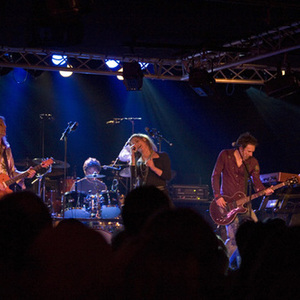 Supefloor is musically rooted in Blues, Hardrock and Soul. With an unmistakable seventies vibe that is intractable to the latest hypes and fashions. Florence (Floor) started her singing career in church. But her first real band was a genuine Soul outfit. That's where she got the love for the early Tina Turner, Aretha Franklin and so on. The guys in the band share a past in Bluesrock and Hardrock.

Superfloor played at the Arrow Classic Rock Festival, Bluesrock Tegelen, Culemborg Blues and many more venues in The Netherlands and Germany.
In 2008 they released their first complete album: Kharma Baby. This album got excellent reviews from all over the world
In august 2010 original member Frank van der Wiel decided to quit the band. A month later the band announced they found a new guitarist! His name is Jeffrey Migchelsen aka Jefferson.
The band is worked very hard to get back on stage with the renewed Superfloor.
And in january 2012 they released their second official album LIVE IT UP!
10 new songs. 100% LIve